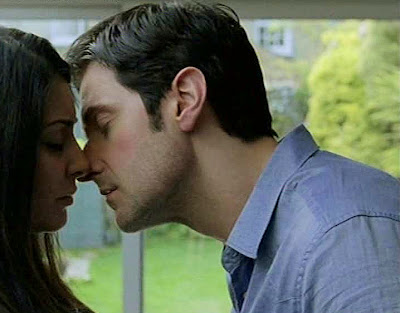 Vicky Frost of the Guardian newspaper gives her thoughts on Lucas North in Ep 4..
>Who is Lucas North?: The mystery drags on for yet another week – seriously, we better get some answers before episode eight, or nobody will care any more. Anyway, as kjenkins cleverly noted of Lucas's glazed kitchen in last week's blog: "I can't help thinking that if you were a mysterious character from Lucas's past who wanted to keep tabs on Lucas and possibly blackmail him, you could do worse than rent the house at the bottom of his garden." (Not actually a reference to Lucas' much-discussed garden shed, but I imagine that would do equally well. Perhaps that's going to be the final twist: Vaughn has been living in Lucas' shed).

Lucas not only seems to be properly rotten now, but he also appears to have undergone an odd character change – running into the hospital to snog Maya in the corridor and be unconvincingly emotional on an ugly white bench. "I just had to tell you. I don't want to waste another moment." Crikey – is that some kind of awful double-bluff dialogue? Let's hope so.

The top-secret, eyes only Albany file appears to focus on a painting of a ship - any ideas where this might be going anyone?

Next week: The CSS snatch squad don't actually appear to have left. And why do they have a picture of Lucas?<
****
And, to think we were concerned Sue might be somewhat cramped in that great outdoors lovenest with LucJohn, and now we learn that Vaughn might've been part of the...hmmm...get together :) as well.  Oh my!...*shock!*  :)
Posted by Ricrar at 4:39 PM

how are you!This was a really fine subject!
I come from milan, I was fortunate to come cross your theme in google
Also I get much in your blog really thank your very much i will come again

Hello,
I'm great - thanks for asking.

Were you searching for information about actor Richard Armitage? If so, we would be happy to answer any questions you might have.

Ah Richard...still thinking about Spooks last night. I do fear what it means that the CSS agents have the photo of Lucas. I hope it's not the end. I'm surprised at what Lucas/John is doing, but intrigued as to what it all means. Albany and the ship,Turner's "Battle of Trafalgar"? Lucas was looking at it with great attention, so I'm thinking there may be an image or a message hidden in the image of the painting. Does the Albany file have something to do with the Battle of Trafalgar? Some symbolism there? Who is Vaughn working for? Who wants the Albany files? What does Ruth know? I don't know,but can't stop thinking about it. Can't believe what Lovely Lucas is doing, or is it John? I also thought Maya's reaction at first when Lucas comes to the hospital is a bit strange thinking about it. If the man you love shows up at your place of work, obviously in an emotional state, would you say to him "what are you doing, you shouldn't be here?"

My viewing of ep4 was rather disjointed, so I'd missed many of the subtle things you've mentioned. Plan to re-watch it asap in order to pull all the threads together.

I did however closely watch the hospital scene and found his initial emotional outburst somewhat out of character for an intelligence officer. They're usually low-key - don't want to attract attention to themselves in public. However, in this case the writers were probably trying to demonstrate John's intense feelings for Maya & the troubled state of mind which led to his 'apparent' treachery.

During the pub scene w/Vaughn, couldn't help but entertain the thought that it might only appear LN had handed a top-secret file to the man. Sincerely hope we're not still wondering if he was indeed disloyal by ep 8 -- that would definitely be cruel & inhuman treatment of the audience;)

Did you hear Lucas in the bedrm scene remind Maya that she'd danced in a topless bar on the last occasion he'd seen her? She replied she had forgotten. We need to hear more details -- is that where she met Vaughn? Hopefully a few answers will be forthcoming in ep5.

You may be right about the kitchen table scene. Richard does have a wicked sense of humor, and he and Laila are friends, so maybe :)

I can't help wondering what an earth Richard's idea of a "passionate relationship" involves, it certainly isn't what I'd call it. In the bedroom scene the characters of Lucas and Maya reminded me of an old married couple, all that was needed was Lucas to wake Maya up with a mug of tea (not even a slice of toast Lucas?)

Now if, following on from Lucas North's outburst in the hospital, he and Maya had hotfooted it to the nearest loo for a bit of passion I could have understood it.

I agree the scriptwriters have changed Lucas North's whole personality, obviously to fit in with the inevitable turn of events. I hope if they do write Richard out he goes out with a bang rather than a whimper (or perhaps both!)

I'm holding unto the bitter end *gasp* to the hope Lucas has not traded state secrets for personal gain. Remember RA recently stating that he'd never want North to be a lesser man than himself. Logically, would we have to conclude RA is capable of treason, if indeed that's the cold hard truth for chameleon-like John? We all know that to be a ridiculous conclusion...so, patiently waiting for some clue to the real reason why Lucas chose that particular agent's ID when accessing Albany. Would he deliberately 'burn' an innocent fellow agent?

That was indeed the case in the US series 'Burn Notice'. The apparent rogue CIA agent(main character) while under severe pressure to give an identity other than his own, did indeed finger the first convenient personnel file, in order to escape capture.

Was Richard conveying 'John's'
intense feelings of intimacy w/Maya by his steamy smoldering gaze on the morning after, as she slept? Upon awakening she didn't seem in any hurry to leave, which would indicate he'd received high marks in the passion category during the night. hehe...no surprise there for us;)

Will fans ever let him forget, if indeed the descriptions of a flaming table tango were a deliberate devilish plant by the two actors? Suppose the possibility could still be - wait for it - 'on the table'(have no shame;) if we can believe Laila's remark that they'd made love all over his house.

I've read in a comment on a blog that Ian Wylie has mentioned a 'table kitchen' in his previous of ep 5. So do not loose hope ;)

Saying GOR had more chemistry with RA than LR with him is a little too much, IMO. I think they're OK, Elizabeta (Paloma Baeza) is still my fav and the love of his life in *my mind*.

haha...OML, as I was typing the remark about the 'S' person, thought of you;) Your ESP radar must have sounded an alert: "beep,beep,beep - the 'S' word was used somewhere in the RA universe...seek & shoot down asap!" LOL

Has anyone caught the slightest smile so far from Maya ?...why didn't she wake up w/a cheshire cat smile on her face? Perhaps we're expected to believe she's such an intelligent woman that she was ashamed to find herself carried away in the heat of the moment.

Maya's general demeanor is rather grim so far - evidently a difficult woman to please;) She gets the object of many womens' desire and then constantly grimaces as though it was her cross to bear.

Off I go like a herd of turtle(s) to read Ian Wylie's latest...

Ian's reference is very vague about Lucas possibly moving furniture in a previous career. Maybe the sly fox is making a tongue in cheek reference to one particular 'moving table'. teehee:)

I think any red blooded woman waking up to someone like Lucas/Richard would have been dragging him back to bed not turning over and going back to sleep. (They have got 15 years to make up for after all!) The introductory scenes of the couple of Maya and Lucas reminded me of a couple of teenagers arguing over something trivial. Lucas North's outburst to Maya in the hospital corridor also sounded like some lovestruck teenager.

Moving on, LN's garden is improving in each episode, very nice, I'm impressed.

I can't help thinking that LN can't be played that easily by Maya and Vaughn, me thinks he and Harry may be playing double-bluff. As for Albany, could it be a ship or even a submarine from way back? There are plenty about by that name, including a sub still in use apparently.

Great point, Sue. Perhaps the Albany file LucJohn downloaded was not the desalinization program. That's the type of clever twist methinks might get our fav spy off the proverbial hook this time. Maybe that's why he had a giddy demeanor in the hospital corridor w/Maya. Couldn't believe his own slyness at getting Vaughn off their trail.

Still leaves the question of how Maya & Vaughn are somehow linked in the plot??

Whenever I've watched a Maya scene, couldn't help but remember some far more powerful scenes between 'S' & Lucas. e.g. the strongest had to be in her flat, when it became obvious she was part of the radical scheme - Geraldine O'Reilly's eyes filled w/tears when she said to him "it's not fair"...*sob*

Thought the actress was great in not only that scene but also the love tryst("Harry & me?..it's sexual":) at his place. Of course, that one would've been very easy for even a non-actress to pull off w/ tremendous credibility:)

As for the garden. Thought of you upon seeing the plant sprinkler on his patio, also when the female reviewer mentioned Vaughn living in the shed. hehe Not enough room in the shed for 3 of you...right?*wink*

Might I possibly ask how one can watch Spooks in the US? Downloaded from iTunes? I wouldn't mind if I had to do it that way. I've seen series 7 on DVD and that's all. :-(

You need to have friends who make certain you see it prior to the dvd release:) Other than that, usually clips of the most recent ep become available on youtube within a week or so of it's initial airing.

Once the dvds for each series are released(available at amazon.UK, you can either buy an all-region player(US: region 1..UK: region 2) or download the VLC(search for it) free of charge & watch the dvds on your 'puter.

p.s. currently, you can pre-order Spooks 9 dvds at amazonUK. Believe I've read somewhere that they'll be released in Nov.