Interesting Upcoming Movies Besides The Hobbit Including Cornwell's Agincourt 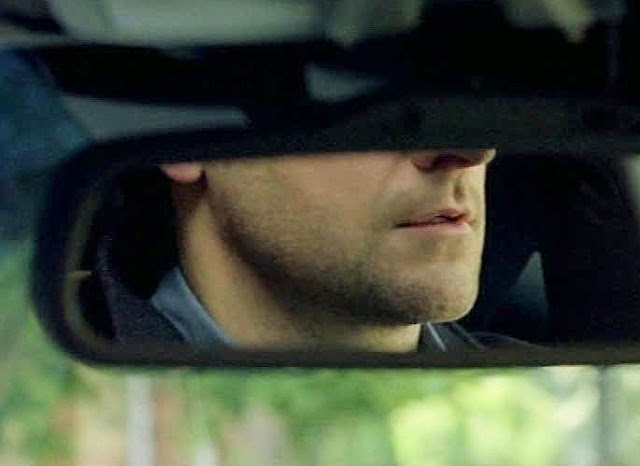 It has been mos since I‘d checked Dezz‘s Hollywood spy website, therefore, was pleasantly surprised to find the following...by the same director as 'Last of the Mohicans' 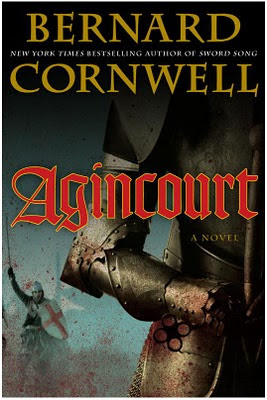 Dezz said:  >Last year I wrote a beautiful article revealing that the story of the famous battle at AGINCOURT was going to be made into a film, but now it seems the possible director could be famous Michael Mann (THE LAST OF THE MOHICANS).

Based on the bestselling novel by Bernard Cornwell, this medieval epic will describe the famous 15th century battle between England lead by young king Henry V and France. Henry lead his glorious army in the quest to claim the French crown but he soon discovered that the enemy was more daunting than he could ever have imagined. But although much bigger, the French army had at least five times more casualties in the end with most of the French noble men dying in the battle.<

[Ricrar note:...could be mistaken, but I believe Agincourt was the battle when the long-bow was first used (by Welsh archers) and made the surprising difference in the outcome.]Hope the soundtrack for the new movie can compete with the one below... 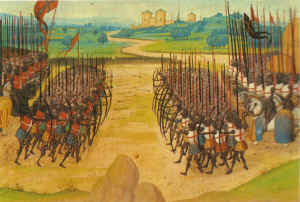 Thought of one other soundtrack, IMHO, that's equally as lovely...composer is Michael Kamen..

*****
Azincourt Cont'd:
This topic may never surface again, so will take the opportunity to file the following information here...

The names of the men of Derbyshire, led by Richard, Lord Grey of Codnor, during the French Campaign of Henry V, and at the Battle of Agincourt, 25 October 1415. From - Yeatman 'Feudal History of Derbyshire'   TOTAL 162 Archers - Grand Total 222 Men (the names are then listed)

>The last owners to have actually lived at Codnor Castle were its medieval residents the De Greys
Since May 1998, Codnor Castle has been on the Castles of Britain at Risk register with a rating of 5. This means that since 1998 Codnor Castle has been in immediate risk of further rapid deterioration or loss of fabric- yet nothing has been done.For some time now, we have been monitoring Codnor Castle and its deterioration, which is of great concern. Therefore, we formed the Codnor Castle Preservation Society to stop the Castle from falling into further disrepair. Our first aim is that the remains of the Castle are consolidated and made safe to stop it from falling into further decay. UK Coal Mining Ltd, the landowners,are under a legal obligation to carry out this consolidation work commencing August 2006.

[Note: ancestors who lived in a nearby village were indeed coal miners who emigrated to the US in 1862. Their village was considered part of Derbyshire for centuries..today it's within borders of Notts.]

Codnor Castle is one of only two medieval castles retaining its original medieval architecture in the whole of the county of Derbyshire, the other being Peveril castle at Castleton. Codnor Castle has a very rich history and the castle site dates back to the 11th century. Codnor castle was the home and power base to one of medieval Englands most powerful family's for 300 years; the De Grey family or otherwise known as the Baron's Grey of Codnor. The De Grey family were wide spread all over England; Thurrock in Essex, Ruthyn in Wales, Wilton in Rotherfield and Chillingham in Northumberland. The senior members of this powerful and very influential family were seated here at Codnor castle.< 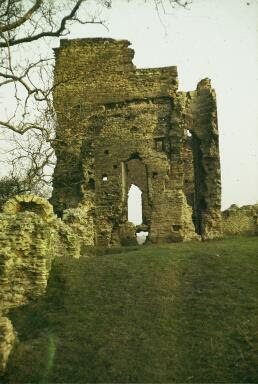 From website below:.....Henry Grey was heavily involved in the Wars of the Roses and was present at many of the great battles of this war including, Towton 1461, Barnet 1471, Tewkesbury 1471, Bosworth 1485 and Stoke 1487.
After the war Henry Grey was devoted to the study of chemistry and was given a license for the transmutation of metals, this meant that he had to fund the studies himself but if any profit was made he had to give some of it to King. Henry fought along side king Richard III at Bosworth but afterwards he was appointed as commissioner of his mines by King Henry VII, with permission to search for tin, lead copper, silver and gold. Henry Grey did marry but he died at Easter 1496 leaving no direct heir. Before his death he had made arrangements with his uncle, John Zouch to purchase Codnor Castle and other properties upon his death.

The king recognised the will and allowed Codnor Castle to pass to Sir John Zouch, grandson of John Zouch Esq. who had married Elizabeth Grey, daughter of Richard Grey.

The Zouch family lived at Codnor Castle from 1496 to 1634 and they made many modifications and upgrades to the castle. The last member of the Zouch family to live at Codnor castle was Sir George Zouch. Sir George emigrated with his family to America. Codnor castle and its lands were sold in 1634 by Sir George Zouch to Dr. Neile, Archbishop of York. The castle was again sold in 1692 to Sir Strenysham Masters. This was the last time the castle was occupied but the castle remained in the hands of the Masters family till the beginning of the 19th Century.

In the beginning of the 19th Century the castle was again sold to Messrs Jessop and Co, who we know as the Butterley company. The Butterley Company purchased the castle site so they could access and mine the minerals under the park. Codnor castle is now owned by UK Coal.

>According to "Deadline", adventurous billionaire Richard Branson is negotiating to acquire the script for COLUMBUS written by T.S. Nowlin for his new production company. If he succeeds, famous director McG (TERMINATOR SALVATION, CHARLIE'S ANGELS) will helm this epic about the equally famous Christopher Columbus and his famous voyage to America apparently in a Zack Snyder's 300 style.< 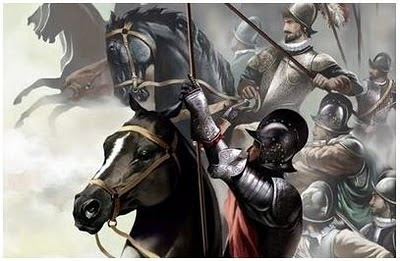 p.s. Dezz does have a post about The Hobbit casting news.(see link below) Not thrilled with the photo chosen... 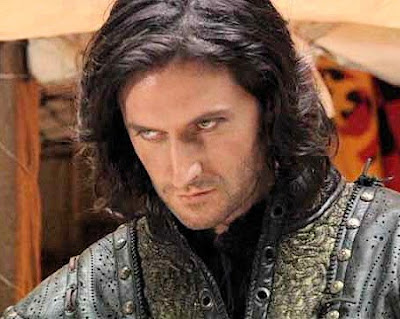 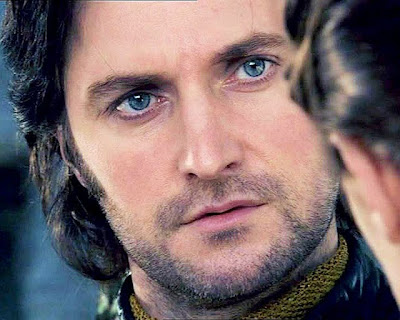 This photo reminded me that RA has already worked with a hobbit-like character in the past... 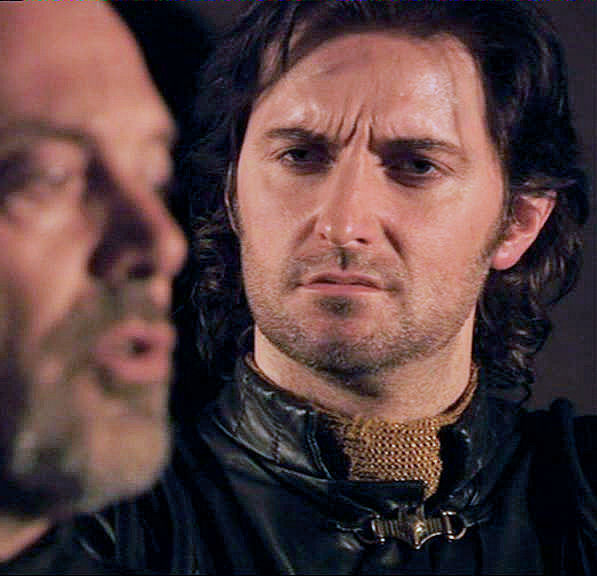 RicRAr, had to tell you I love the music from Last of the Mohicans oo.
One of my favorite books when I was a teenager, and one of my favorite films.
I've read "Agincourt" and think it could be a great film with the right director and actors.

It was the only time I felt motivated to buy an entire soundtrack, Musa:) Actually, IMHO, I believe it was Daniel Day Lewis's best film ever. Can't think of another one of his that comes even close to the performance he gave in the adaptation of what's considered America's first classic novel.

If not Bernard Cornwell's most recent publication, it's very recent. He's so darn prolific there was probably at least one pub after Agincourt:)

I found a list on line of archers who supposedly participated in the battle of Agincourt from the small village identified as my paternal ancestors hometurf for centuries. There were 2 archers on the list w/the same surname, medieval spelling. Who knows if there's any validity to it---very doubtful records were preserved from quite that far in the distant past:)

A history buff can't help but get a thrill over such a discovery. hehe