Spooks Article in The Independent: Excerpts...Sincere thx to Musa for headsup.. 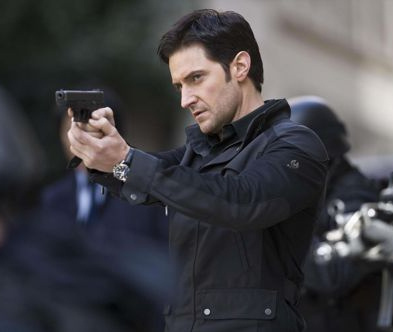 Spooks: The drama with more ghosts than most
Characters getting killed in TV spy series is nothing new, but has Spooks knocked off too many to be taken seriously?    By Ben Walsh - Wednesday, 6 October 2010, The Independent

>Has there ever been a TV show as wilfully preposterous as Spooks?<
[Huh? Did he miss the next to last season of ’24’ when the White House was invaded(has to be the most secure piece of real estate on the planet) and female US Pres taken hostage?? Nothing so far in series 7 to ep3,S9 has been quite that preposterous in Spooks, has it?.]

>Has any other long-running series ever been so pitilessly dismissive, careless even, with its main characters? ..Or the Scooby Doo gang – Velma, Shaggy, Scooby himself – being systematically tortured one episode, and shot dead the next, as befell Miranda Raison's Jo in Spooks, series eight. Okay, these are silly comparisons, but Spooks is a supremely daft series. It makes 24 seem restrained.<
[Beg to differ w/last remark re ‘24’ - it often could‘ve been perceived as super daffy. Well, that’s true for those individuals still living in denial of the current realities in the world. The writer would’ve probably considered those predicting, during the 1930s, a Hitler triggered conflagration to be daft as well (some did have that attitude as we learn from today's history books) Case in point for all doubters - look at current headlines re conditions in Pakistan. The Taliban is attacking & destroying NATO fuel supplies. These are Islamist radicals and we all know their ultimate goal, which is world domination. Especially unnerving when you consider Pakistan is a nuclear nation.]

As for Jack Bauer - he was exposed to nuclear radiation…near death for almost an entire season & managed to survive and thrive. I’d match that preposterous scenario w/anything in Spooks IF almost all of it wasn’t actually tragic possibilities; unless, that is, western nations are prepared to deal deftly with current threats. Believe Ros would’ve agreed with that sentiment. p.s. Interesting to learn the world has apparently been treated to Scooby Doo & the Gang:]

Spooks, which is easing..into its ninth series, zeroes in on a small, not terribly merry band of MI5 officers working in a laughter-free office known as The Grid.
[I reiterate..huh? Didn’t he hear the Nancy Drew jokes in S8?…or Ros’s cutting aside about Lucas being forced to spend an afternoon in the line of duty at a strip club? Hehe Lucas's saucy smile after her remark made it clear he’d selflessly do whatever it takes to keep the UK safe..St. Lucas,,err, John??:] 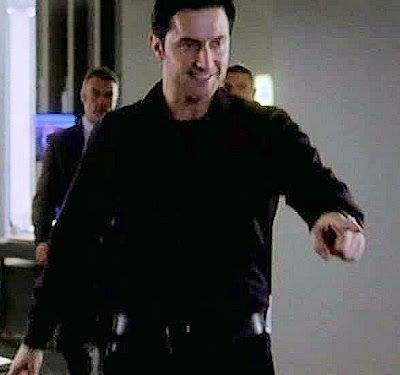 Crème de la crème remark:
>And what, for the love of god, is happening with MI5's vetting process? It is, frankly, shoddy. Our new rugged, square-jawed hero, Lucas North (Richard Armitage) isn't who he seems. He appears to be someone called John, as a shifty Iain Glen keeps on popping up to inform us. Surely someone at the vetting stage would have twigged this?<
[Unfortunately, many clever people do manage to evade even the most efficient screening processes. There’s a long list of double-agent master spies to prove it.]

>Not many series would get away with this, and after poor, doe-eyed Jo and rock-hard secret agent Ros were disposed with, I didn't feel like "playing" any more… if Harry's spymaster walks out, or is slaughtered, I really do think I'll stop playing.<
[Obviously he considers himself childish to keep watching but evidently can’t help himself…it’s mindful of some females, after they’ve watched N&S..they compulsively stumble unto RA sites mumbling “this never happened to me before"..] 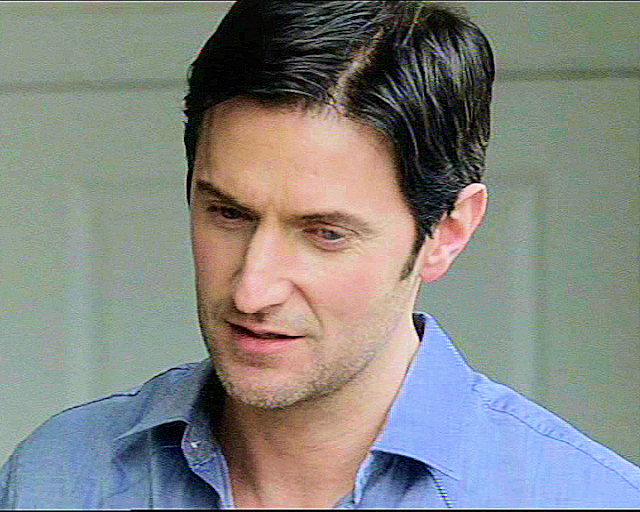 Viewers might not watch if Spooks was true to life and depicted the lives of real spies. The series is a piece of dramatic fiction designed to be exciting. Any viewer has to be willing to suspend disbelief whatever tv-programme or film she watches. The same goes for books. This is such a basic premise that I'm surprised that the writer even bothers to make these points about Spooks!

I'm loving Lucas in Spooks 9. He's so gorgeous! And I do enjoy seeing him in love, so bring on more Maya!

I think he's been watching a different tv show :S.

This has nothing to do with anything, but can I just say, I am completely in lust with that black jacket. Dang, he wears it well!

You'll find Musa's interesting comments on the article under the 2nd or 3rd post. Believe her intention might've been to post it here.

IMO, the writer is probably one of those individuals who suffers from commitment to unrealistic 'political correctness'. He's been convinced by the globe's PC police that current terrorist threats have been overblown..unsophisticated melodrama..; therefore, he's almost embarrassed to find himself addicted to Spooks.

Would he really stop watching if the writers took their 'poof--there goes another major character' habit to the nth degree by eliminating Harry? Hopefully, we'll never know the answer.

Actually, if LucJohn does a permanent ghost-like fade, playtime with the series will definitely be over for me.

Hey there Laura, our posts passed ea other in the ethernet.

Yes, Lucas's black jacket fits him like a glove. I've noticed quite a few fans are doing handstands over his blue dress shirt in Ep 3's final scene.

What's everyone's reaction to Lucas's house? There are very few details to give us clues to his decorating style - perhaps 'minimalist' applies.

Interesting that a small back garden was included, isn't it? Richard said that's a fav feature of his RL home.

Lucas' house is a typical British home with French windows opening on to a back garden. He even has a garden shed for pottering about in, should he have the time and energy from saving the kingdom every week.

I agree with Laura that this series' jacket is especially yummy and fits him well!

I actually like Spooks as a series and would watch if Lucas left, but I wouldn't make an extra special effort to get hold of each episode as I'm currently willing to do.

Lucas' house is a typical British home with French windows opening on to a back garden. He even has a garden shed for pottering about in, should he have the time and energy from saving the kingdom every week.

I agree with Laura that this series' jacket is especially yummy and fits him well!

I actually like Spooks as a series and would watch if Lucas left, but I wouldn't make an extra special effort to get hold of each episode as I'm currently willing to do.

Our home has french doors on the back as well leading to a large screened porch. The latter was added to the house 10yrs ago and we've constantly referred to it since then as 'the good investment'; because we've practically lived on it during the summer mos. Tall trees grow at the bottom of a sharp drop that begins a very brief distance from a narrow path running along the width of the porch. While reading/dining/entertaining there we're shaded by the tops of the trees; hence, another frequent reference is 'our treehouse'. Couple suirrels return every summer and regularly try to raid birdsnests. You would not believe the loud squawking they prompt from the feathered friends.

When first married we'd lived in an apartment along side a much older couple who squabbled with ea other almost on a daily basis. Whenever the birds & squirrels cause a noisy ruckus, we call them "the Browns"...the former neighbors;)

Found myself admiring the detail work on LucJohn's black jacket in a recently released promotion pic.

A global stereotype still expects every english person to have their own garden(...humming lyrics in my mind .."in an English country garden") so it's good to see our fav spy following the tradition;)

What about his book collection? Is it still stored in boxes in the shed?

Could those hand-made baskets on the bookshelves be from Africa where he and Vaughn's mysterious activities occurred? dum-de-dum-dum...Won't be long before we have the answers. Cannot believe S9 will already be half over on Mon:(

Yes I have french windows as well, leading onto the back garden, but I'm not overlooked. I've planted lots of trees and shrubs to make it lovely and private. I would have thought with Richard's love for joinery and DIY he would have had some decking leading out from the french windows, I prefer paving, and have planted lots of herbs, with climbers around the doors. As for the shed, he could be hiding weapons of mass destruction in there. Was that a vandal-proof metal shed I spied in his back garden? Not the usual wooden shed with windows.No washing line either, wonder who does Lucas North's dirty washing? (Could it be Maya - or Vaughn?)

Who does LN's dirty laundry?...hmmm, according to RA's recent revelation that he almost lives full-time (while filming) in the fictitious character's wardrobe, I'd say it's the BBC...non?

Not to mention the fact that when he's forgotten to do his washing he finds himself scrambling around picking up his clothes off the floor, from the night before, at 6.00p.m. in the morning when his driver is knocking him up to take him to work. Perhaps he should take a leaf out of Lee's book, from Cold Feet, and get his girlfriends to do his washing. Remember when Ramone put his bright red undies in the wash and turned everyone's whites pink? (Now I wonder if Richard has that problem? Red undies I mean. I reckon he's a plain white Y-fronts man myself, not a boxer kind of guy. Wouldn't mind finding out!!!I wonder if he ever wears those undies a fan sent him recently, apparently they were ones specifically designed not to ride up those cheeks. Cheeky minx!