LATEST Whaaaa:) + Is This RA Running From the Store? + Other Captain America(Manchester) Videos -

It's never pretty when a grown woman cries...despite the opposite line being used numerous times in films;)...Whaaaaaaa!  Latest CA buzz says RA's role is indeed a baddie (Laura's happy), who is killed off...that's the sob, sob, part.  Here's the website w/details...
http://dailyblam.com/news/2010/09/22/captain-america-movie-crew-filming-part-project-rebirth-scene
****
Is this RA running from the store in a grey suit?  The actor is tall, black hair...is it his running style as well?  (thx to all providing more info)...the coal black hairstyle does look like Richard's in yesterday's pix.  The actor is moving so quickly it's difficult to see his face.


****
LATEST twitter talk from one of the Manchester blogger/videographers says a sub(marine) is part of the upcoming film shooting in Liverpool. WooHoo!..maybe;)
http://www.comicbookmovie.com/fansites/joshw24/news/?a=22965

Fine sleuthing by Musa provided following website with vids of the Capt America filming in Manchester.  One of them is supposed to show RA running/walking? from a store...
http://comicbookmovie.com/fansites/MarvelFreshman/news/?a=22935

Fascinating how the turn of the century(20th) storefronts have been transformed...one is filled w/1940s era bridal gowns even though the original 'Bicycles' sign is still in place.  There's also a WWII 'Buy War Bonds' poster plastered on one building. 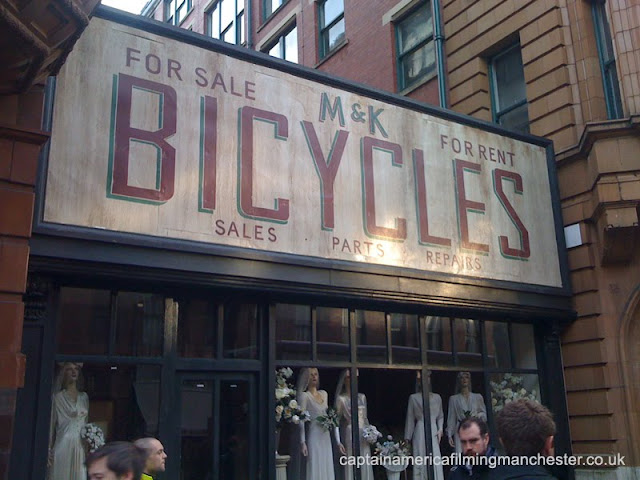 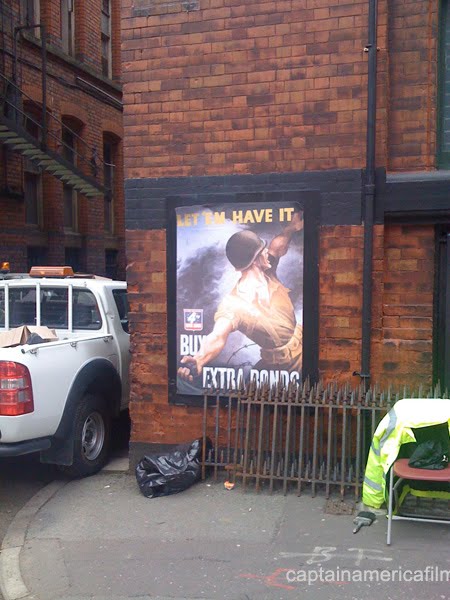 It all makes sense now of course. In a recent interview Richard said that his next role would take him into "Deep Water". He is currently filming in Manchester, England until the 3rd October.

Here's a link with some scrummy pics:

Guess who's going on the metrolink tram in to Manchester very soon!!!!

Oooh...he's in trouble now...can't hide from us any longer...Sleuthing Sue will flush him out of hiding;) hehe...make sure he's not totally knackered(luv that word;) after you've had your way..leave some leftovers for us. teehee

If his character in the film is Namor and he's in his itsy bitsy teeny weeny swimming costume he'll never come up for breath again!!! Actually it's been quite warm and sunny in Manchester during their filming, so why he was in that leather jacket I don't know, he must have been sweltering! What some men will do to look good, he really seems to like his leather! They were filming again yesterday but it seems more security has been increased. Drat! See:
http://www.hobbsy.com/captain-america-manchester-set-photos-wednesday-22nd-sept-2010/
If they've been filming today they will have been caught in a massive thunderstorm and heavy rain, well it is Manchester!

Thx for all the yummy details, Sue.

I've just read that London & possibly a location in So Wales are on the shooting schedule. Capt America is supposed to be in Liverpool on Mon to start filming there. Will RA be there as well??

Maybe Richard suspected a few gawkers would recognize him & snap pics. Evidently he tries not to disappoint his public...if we find him gorgeous in leather - he aims to please, as usual;)

I've yet to read a description of this Namor's participation in the new movie. Comic fans chatter on about movie details in the same way we do about Richard. There has to be more information at one of those sites.

Suppose the script is 'top secret' - maybe most of the conversations are simply speculation...BUT, that's what we thought about RA being cast in CA as well.

Yeah, I guess I'm happy... as much as I love him as the Hero (he'll always be a hero to me... awwwww), he's just so good at being sinister. Ok, I've only got Gisborne to base this on - I haven't seen a lot of the other stuff - but he creates such rich characters, I think he'll be good at whatever they throw at him.

Besides, he said himself that he wanted to try the "baddie" roles for a while. Many actors have said that those roles are a lot meatier and more fun to develop and play. Just please, God, no "elephant man" roles, ok?

Laura, his Paul role in BTS was a complicated baddie. RA handled it with great sensitivity. He convinced me the character was not beyond redemption...BUT, no sequel so he'll remain forever a scurrilous man.

Lee is more of a scamp...skirtchaser. Found myself without any sympathy for that character. In fact, you hope his hot tempered wife catches him:) RA does a very manipulative yet charming womanizer.

If Richard is playing the Kruger role, will the Manchester scene be his only one in the movie? UNLESS, that's a final scene. Seems they usually shoot out of order...whichever scene is more efficient economically and calendar-wise.

Yeah, I thought of the Kruger thing, too... that would be a real shame if RA only has a "walk on". So much talent to tap, wasted.

So far, there is no actor/character listed for either Kruger or Namor on IMDB. Apparently, they want to keep us in the dark for a few more days, at least...

Another consideration - the Namor character is mute in the comics. That would really be a heart-breaking waste:(

Perhaps Richard looks at the role as a toe in the water strategy. Acquire the means to say you've appeared in a major film, and eventually more worthwhile doors will no doubt open. Can't wait for that day;)

Will we actually go to a theatre and sit down surrounded by 12yr olds to watch CA? hehe ..will probably instead wait until it's available at Netflix.

I can't say that the film CA sets my heart all of a flutter, if RA wasn't in it I wouldn't give it a second thought. So Richard is Heinz Kruger and a baddie to boot! I bet Richard would have liked the make-up department to give him a jagged scar right across his face just to get his fans going! Not that it would put us off, probably the opposite! This will raise his profile in America I'm sure. I have no idea about all these American comic book heroes, but hey I'll watch anything with Richard in it. I hope he comes back to Manchester I'm planning on going there next week to have a gander. I'd love to get his autograph or have a quick word. Those streets where they're filming are ideal and it reminds me of those old James Cagney gangster movies. There's some lovely old theatres down that way so I hope he gets chance to take a pew and chill.

Comic books were never my fav reading material either, Sue.

In fact, until rumors started about Richard & CA, I wasn't even aware comicbooks today had such a huge & enthusiastic audience. Maybe the allure is the spandex costumes;)...know we'll appreciate that aspect. But, unfortunately:( I don't believe RA will ever don one as Kruger. He does cut a 'dashing' figure(in more ways than one) in the grey suit, doesn't he.

The script details for the new film must have as tight security as the White House...have not so far managed to find any leaks.

I doubt if Richard will be taking any of the costumes home with him from this character's wardrobe (although he has been wearing that old cap!)

It's strange Richard hasn't been put on the cast list on IMDB and I wouldn't totally rule out him as being Namor, perhaps putting a different slant on comic book stories. If he's doing the sub role in Liverpool he could be Namor yet. In a live interview he mentioned that he would like to do a thing where he would have to swim (something along that line) in water, especially as he has a fear of deep water. Could he be the man that someone saw shivering by the water awaiting the shooting of a scene in Liverpool? Never say never! It might give the storyline away if Richard's character was mentioned.

Hope he manages to visit his mum and dad between filming in Manchester and Liverpool, it ain't far from there.(Just a hop, skip and a jump)

Gosh all these super heroes in comics! You never got all these stories in the Whizzer and Chips (my fave comic when I was a kid)