Many sweet tweets today re Spooks 9:

Kazters
ohh press release is up for ep 2 of s9 of spooks! SPOILERS http://www.bbc.co.uk/pressoffice/proginfo/tv/2010/wk39/mon.shtml#mon_spooks about 2 hours ago via web

SPOILER ALERT: do not read if you prefer to stay completely in the dark.
BBC's synopsis of eps 1 & 2, Spooks 9

The team at Section D is in mourning following the tragic death of Ros Myers, who was killed in an explosion while trying to save the British Home Secretary, as the award-winning spy drama returns for its ninth series. Section Chief Harry Pearce is hit particularly hard by the loss and he's dismayed to learn that a trusted friend has blood on their hands. Harry wants revenge and will stop at nothing to get it.

One month later, Lucas North boards a ship in Tangier to track rising Somalian Al Qaeda star, Abib. Alongside Lucas is Special Boat Service (SBS) agent Dimitri Levendes, who is masquerading as the ship's captain. An unexpected interruption from what appears to be Somali pirates puts Lucas in mortal danger. His unlikely saviour is an Eastern European prostitute, who he later discovers is undercover mercenary Beth Bailey, also sent to track Abib.

The pirates are a much bigger threat than first anticipated – they are in fact an Al Qaeda cell who have smuggled explosives onboard and are headed for the UK.

After escaping the ship and returning to London, Lucas and the rest of Section D concentrate on stopping the floating bomb. Beth, who is keen for a job on the Grid, turns up unexpectedly with information about the boat. Harry remembers Beth from the past and is unsure whether she can be trusted but, with time running out, the team has no other option. Harry is forced into taking drastic action to prevent a terrorist attack that could hit Britain at its very heart – the Houses of Parliament.

Meanwhile, Lucas is shocked when he is visited by an unwelcome ghost from his past.

Beth Bailey is thrown in at the deep end on her first operation with Section D, as the tense spy drama continues. She goes undercover as an oil trader at a secret meeting of Britain's top oil dealers. After receiving intelligence that Robert Westhouse, an influential oil baron, is the subject of an assassination attempt, Beth is tasked with protecting him.

Before they've even arrived at the meeting, the oil traders are attacked in a machine gun massacre. Only Beth and a man named Jacob Chapman survive. Assuming the attack is related to the planned assassination, Section D set to work on uncovering the culprit. However, Ruth Evershed digs deeper into the case and is shocked to discover a link between one of her colleagues and the masked gunmen.

Elsewhere, Harry Pearce and Lucas North become suspicious of Westhouse and launch a secret surveillance operation on his mansion. They soon discover that Westhouse has arranged to take possession of a deadly ex-Soviet nerve agent and is planning an attack, with potentially catastrophic consequences. It's a race against time as Harry must ensure Westhouse's plans are halted before they cause irreversible damage.

Meanwhile, Lucas is reunited with an old flame, Maya, who he hasn't seen for 15 years. With emotions highly charged after so much time, how will Maya respond to Lucas re-entering her life?

Beth Bailey is played by Sophia Myles, Robert Westhouse by James Faulkner, Jacob Chapman by Nigel Lindsay, Ruth Evershed by Nicola Walker, Harry Pearce by Peter Firth, Lucas North by Richard Armitage and Maya by Laila Rouass.
*****
Why not enjoy the next few days w/an RA revisitation.  Beginning w/the vocal music to our ears found at the following blog.  It begins with a deliciously generous excerpt from Richard's narration of Lords of the North and continues through many Robin Hood clips as well plus a snippet from Heyer's 'Sylvester.'
http://flyhigh-by-learnonline.blogspot.com/2010/02/ra-friday-whos-got-crush-on-his-voice.html

The blogger, Maria Grazia, provides what she terms "visual help for your listening to THE LORDS OF THE NORTH: Richard's Uthred by Vivayn"... 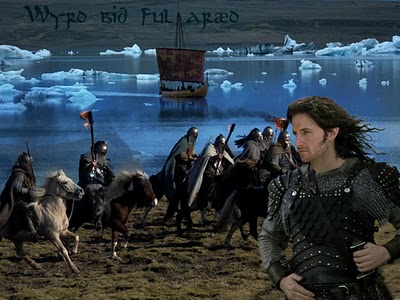 ****
From ancient history to a most enjoyable period drama vid that includes the future Mr & Mrs Thornton...
Posted by Ricrar at 2:53 PM

I wish some smart producer would make a "Lords of the North" movie starring Richard Armitage...or better yet, a series based on the Saxon Chronicles starring Richard, like they did with Cornwell's Sharpe novels with Sean Bean.

From your mind to some producer's, Musa. A LOTN movie starring the only possible Uhtred, Richard, would be fantastic. I listened today to the excerpt at the above website & was reminded why I was inspired to listen to the entire narration 5Xs in a row. It's truly a vocally stunning performance. At 6'2" he probably does have a few strands of Viking invader in his DNA:)

Don't know if you ever watch Dancing w/the Stars. The only other time I've been interested is when the most recent figure skating olympic gold medal winner participated.

Besides Bristol Palin, this season's couples include Jennifer Grey(remember her in Dirty Dancing w/Patrick Swayze) and Forence Henderson(the mother on The Brady Bunch). Didn't expect to be interested in anyone other than Bristol, but will definitely watch those two as well.

Bristol's partner is an amazing dancer--especially hot Latin numbers..that's his expertise. I'm about to post his cha-cha-cha w/a partner who actually won that season's competition. Difficult to believe she's only 17yrs old.

Good evening... don't mean to change the subject on you, but I was looking through YouTube tonight on a Mary Chapin Carpenter mission, and came across this...

Be still my heart. Don't know if you've seen it, and thought you'd enjoy it.

Darn it, you are going to entice me to spend $75 on that darn LOTN audiobook on Amazon. Oh well, my B-day is in two weeks and cant think of a nicer present.
So is this going to be LN last season? I just watched the 8 part Pillars of the Earth (very good actually) and newest P&P with Matthew MacFadden and a couple of earlier MI5s with RPJ and am struck how MI5 is a rite of passage for period drama guys.

Richard would be wonderful as Uhtred! Love the pic you have here of him!

A good place to purchase LOTN is The Audiobook Collection.They are friendly helpful people, I had to wait a while to receive it (in Australia) but well worth it. Mr Armitage is fabulous. The details below were on the RichardArmitageNet.com website a couple of weeks ago.

The complete and unabridged version of the Lords of the North audiobook is available to order exclusively via The Audiobook Collection and is priced at £22.99 plus £3.50 postage & packing. It comprises 10 CDs (or 10 cassettes if you prefer). To order, phone their dedicated Customer Service telephone number 01225 443400, (overseas +44 1225 443400) or email info@audiobookcollection.

Checkout http://vulpeslibris.wordpress.com/feed/ on Friday reviewing Audiobook LOTN - listening to my copy over and over again, really appreciate his masterful dramatic reading.

Sincere thx for all the helpful feedback on LOTN. It would definitely be a dream come true if we one day see RA on the big(or small) screen as Uhtred.