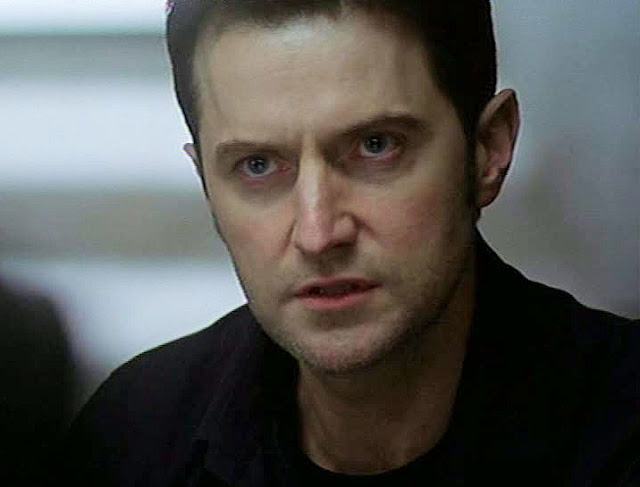 When word gets out that the Azakstan Freedom Front (AFF) is searching for a lethal outlawed nerve agent called Paroxocybin, Harry Pearce sends Lucas North to help the Russians stop them, as the tense spy drama continues.

Lucas and FSB officer Viktor Barenshik succeed in destroying the sample, but Lucas is shocked when the AFF members are mercilessly killed by the Russian agents. Back in London, Section D become aware of a member of the AFF, Aibek, who has got away; leading Harry to make the controversial decision to let him run.

Section D soon get intelligence that Aibek is on his way to London in search of a second sample of Paroxocybin held by British scientist Stephen Kirby. As Aibek arrives in the capital he is picked up by the team who realise that Harry's earlier decision could have terrifying consequences for national security. While trying to locate Aibek they are led to Kirkby's office, but it's too late; they find Kirby alone and beaten.

Lucas, Beth and Viktor follow Aibek's trail through London, desperate to get to him before he finds the Paroxocybin. Meanwhile, Viktor's behaviour exposes him as untrustworthy and it's soon clear that he has his own plans for the nerve gas.

With time running out, the team have to work quickly before London becomes victim to a biological weapon that has the potential to wipe out the entire city in hours.

When a Chinese snatch team arrive in London for a 48-hour visit, Section D's suspicion is aroused, as the tense spy thriller continues. This causes Beth Bailey to call on the services of Kai, a Chinese Security Services agent who she has been grooming to help infiltrate security.

Ruth Evershed goes undercover at QMK, a research facility, and discovers that the Chinese are looking for Jiang Lee, a scientist who has discovered a de-salinisation technique worth billions. Desperate to get hold of Lee, the Chinese will stop at nothing, but the UK cannot afford to lose an intellectual property of such value.

Meanwhile, a bomb is reported at QMK and Ruth quickly evacuates with Jiang Lee. However, it soon becomes clear that the bomb was merely a ruse to get Lee out in the open, and the team begin to believe that Kai might be a triple agent.

Later, there is suspicion from Section D on receiving a second bomb threat, but when they investigate they discover a bomb in central London. With minutes to spare they are under pressure to stop a catastrophic explosion and ensure Jiang Lee stays on British soil.

Amid the chaos, Lucas and Maya's relationship intensifies and he becomes increasingly distant from the team. Are Lucas's loyalties beginning to change as his past catches up with him? 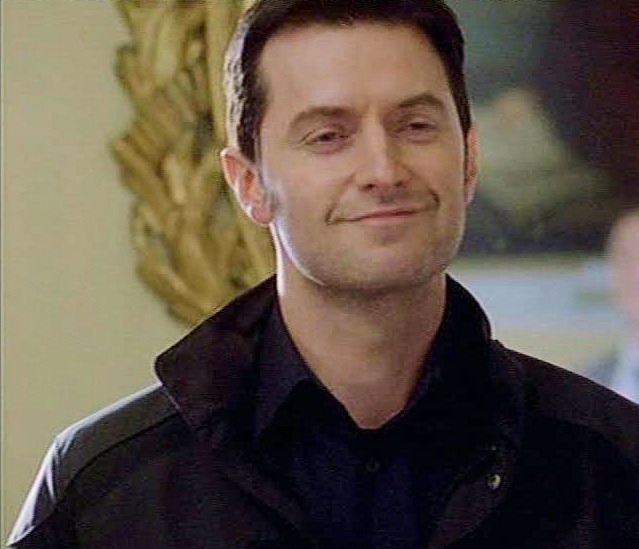 A couple questions from a recent RA interview in Best TV.  Reporter asked "Lucas has been waterboarded & tried to hang himself.  Do you do your own stunts?"
The beginning of Richard's reply, to be perfectly honest, somewhat stunned me.  He said "It's TV, darling".  The BBC cannot afford doubles."
[hmmm,,,'darling' - hopefully it was said w/tongue in cheek:)  In the US, it's a stereotype that show biz personalities start their sentences with 'dahling' this and 'dahling' that.  A skit spoofing celebrities would definitely put that word in their mouths.  He was really joking with her...right?  Need a language  nuance expert here:]
UPDATE dahlings:
Comment consensus below is that Richard's dry sense of humor was on display w/his use of the 'D' word;)
He was also asked if Maya is more trustworthy than Lucas's last girlfriend, the double agent:)
RA's reply: "Yes, Maya is the love of his life.  Filming the love scenes with Laila was fun.  We did one on the kitchen table!  Once we'd done the first one it was easier, and you can see the chemistry between us."
["ONE on the kitchen table"...hooray! there's more than one. ] 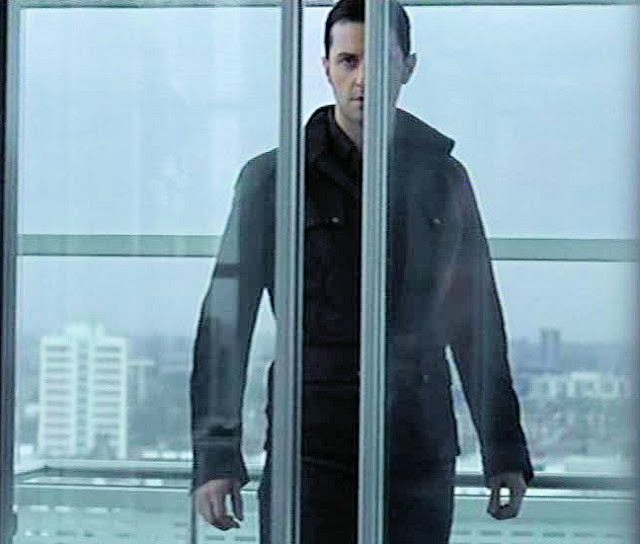 Does the above pic remind anyone else a little of Lucas peeking through in this collage? 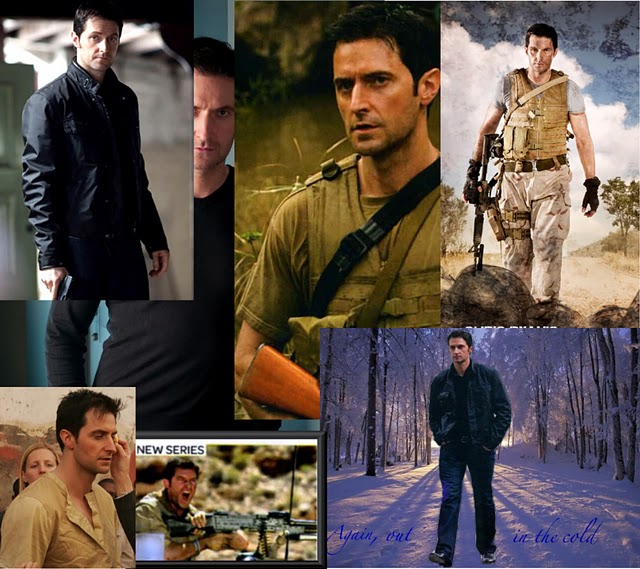 http://unpopcult.wordpress.com/2010/09/28/spooks-s9-ep-2/
****
Anniversary is here & hubby will receive the following sentiment, along with all the other loving observances of our special day.  Will make it a double dedication here - **First to the best sweetheart a woman could have in life**
..and Second...to the best actor in the world...(watch the male dancers...that's what I do;)
Is Heinz currently filming in Liverpool?  Perhaps we could send Lucas North to flesh out the facts for us;)  If anyone manages to snap a pic of herr Kruger, we'll most likely find it in the Echo newspaper's CA gallery..
http://www.liverpoolecho.co.uk/liverpool-news/local-news/2010/09/23/captain-america-in-liverpool-gallery-and-send-us-your-pictures-100252-27327254/
Posted by Ricrar at 4:56 PM

I was a little surprised at the "darling" too, because I've never heard him use it in any of the "live" interviews, TV or radio,I've seen of him so far. But, he might have said it as a joke, he has a great sense of humor - but in print it's not the same because we can hear his voice,or see his face. Or maybe he didn't say it at all and the interviewer added that.
Happy Anniversary - have a wonderful day!

Thx for your thoughtful message Musa:)

I believe you're right about the possibility Richard never said the word 'darling' at all. Perhaps the interviewer substituted it for another word.

The rest of the interview seemed a tad stilted as well, didn't it. It did not have the usual playful, warm attitude RA's replies usually convey. The writing style could account for that.

Darling struck me as completely out of character - maybe it was wishful thinking on her part;) Assuming it was a female....well, guess it could've been a male reporter BUT that would definitely rule out Richard using the 'D' word;)

Happy anniversary! Just out of curiosity, what day is it? Mine's just around the corner, as well... on Saturday.

Our's is tomorrow. Going out to dinner tomorrow evening and within a few wks we'll spent a few days in the NY Finger Lakes region. That's one of our fav short getaway destinations. We'll try to time it for the peak Autumn leaf peeping advantage.

A few yrs ago we drove along the New England coastline to celebrate. That's where we heard the appropriate term 'leaf peeping' for the first time. They're over-run up there w/tourists trying to catch that 10day period of brilliant red/copper/bronze/golden colored leaves before they fall.

About 10yrs ago we drove to the Thousand Islands region of Canada at this time of yr, and constantly hummed along the way the Canadian Sunset tune.. "the fallen leaves drift by my window, the burnished leaves of red & tan... "

Our trees are already starting to change. Love the change of seasons... although Winter does become challenging at times;)

Wish your DH the same from us:)

Re. "darling": As Richard's talking about the BBC's famed lack of cash, I would definitely assume he's using this endearment ironically. The journalist left out "he said with a sardonic grin". I can hear him saying it with a naughty glimmer in his eyes!
@Musa: I agree that we certainly lose a lot by not hearing the tone of voice or seeing body language in a written interview. That must the reason why quite a few interviewees complain about being misquoted.

Enrich, darling;) your opinion/impression of RA's use of the word is greatly appreciated...as are your thoughtful sentiments for us. Thank you.

I agree with both Enrich2 and Musa, when I read it I thought it couldn't have come out from his mouth, maybe he said it differently and space-wise, the journalist change it or if it's literal, it was ironic.

Hope you had a great day on your anniversary RiCrAr.

Thank you OML:) It was a wonderful day in every way but one - the weather. The skies opened and we were deluged almost the entire day, BUT that didn't divert us from enjoying a romantic, delicious dinner at one of our fav dining spots.

Good news is that our wedding day weather was far better - sunny with a slight breeze. We commented more than once yesterday that of the two days good fortune had smiled upon us.

Best proof that RA's 'darling' address was conveyed with humor is the fact he'd never used it in any previous interview among at least dozens in the past few years.