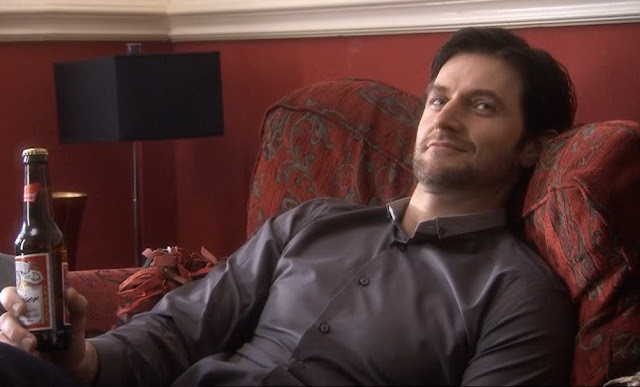 Annual holiday gift-giving and family idiosyncrasies.
Do you have one person on your gift list who always causes you to pause and hope the gift you've chosen will not disappoint?  Me too:)  For me, the person this year was my older sister--the one who lives almost 200mi away and sent N&S to me for Christmas a couple years ago.  She had no idea at the time that I'd noticed actor Richard Armitage as Guy of Gisborne about 6mos earlier in Robin Hood.
This year I played for awhile with the thought of sending her RH, series 1 but had concerns she might find it a bit immature and even silly at times.  In need of another gift idea for her, bit the bullet and shipped - with fingers crossed - the RH dvd a week before Dec 25th.
Yesterday, a lovely thank you card arrived and, to my great relief, my sibling downright gushed about how much she'd enjoyed all 13 episodes.  Apparently she breezed  through it within the past 2wks, and has already started a second viewing.  Isn't it a satisfying and pleasant feeling to realize someone really enjoyed their gift from you.
Curiously, I've found myself reflecting on the first series.  Then realized it would be fun to revisit it and visualize what the impact might've been, through my sister's fresh eyes,  to the updated version of the ancient legend.  Decided to begin with a few pix from the initial series and then was pleasantly surprised to find.....
a reworked classic Guy vid by JulietD001 ...
From RH, S1, Ep 1... 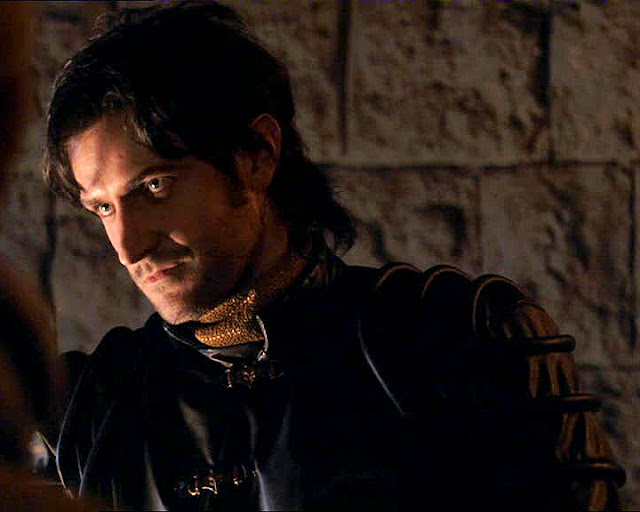 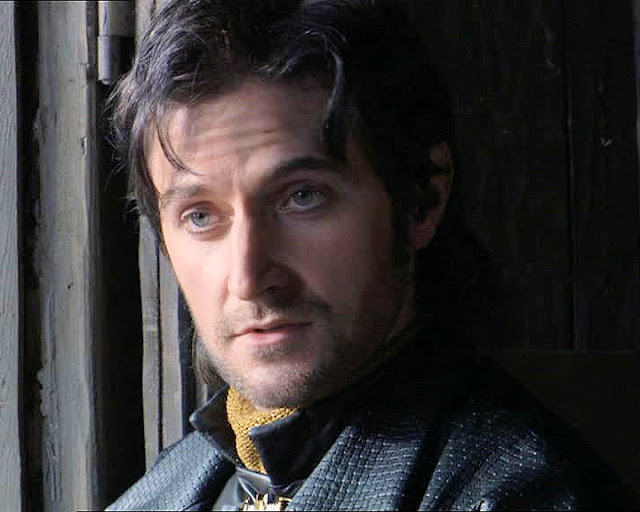 There is proof positive that RH writers dropped the ball when they failed to enact at least a temporary merger between Guy and Marian - one of the hottest on-screen couples ever.  The evidence can be found in the following vids.  Can't deny these positive effects on the greater good of mankind from their relationship...(perhaps a slight exaggeration;) 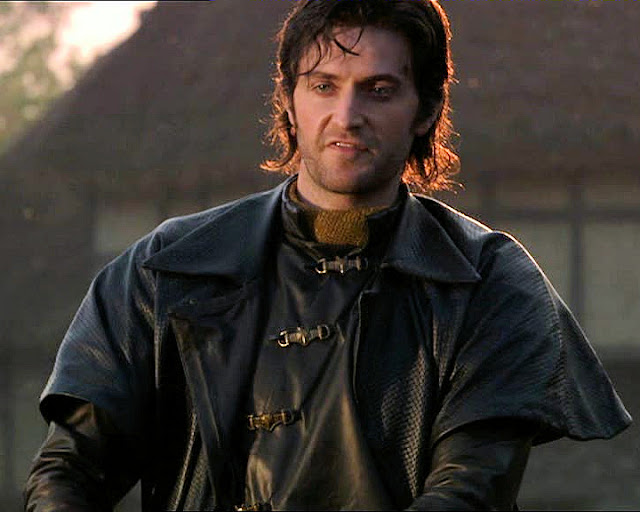 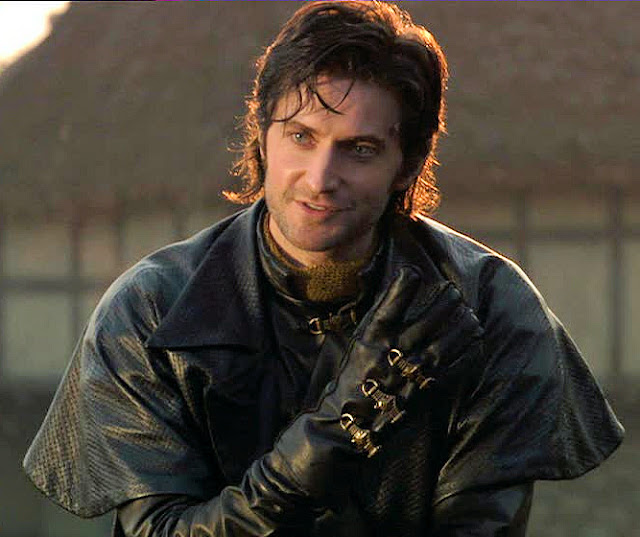 Ep 1 - part 1 of 5...
News of RA awards keep rolling in.  As reported earlier today by Sue, the hunky of the year award was finally announced by The Hunkess after a month of repetitive voting by 'vote early & often' RA supporters:)  There are crucial times when the one (wo)man, one vote golden rule can be relaxed...must've meandered over there to vote at least a half-dozen times during the month...was much like the moth being drawn to the flame;)
Now to add more frosting to the cake, there's another prestigious *cough* award by the 'unpopcult' website -  The Armitage received the 'I Would  Hit That' title with the following words...
>I Would Hit That (Male): Richard Armitage, Spooks
The Armitage has clearly won a place – a special place – in the hearts of Unpopcult readers, successfully defending both the country and the I Would Hit That award he won last year. With another Strike Back slated for 2011, who would bet against a threepeat?

This is the last day of voting in Dezz's James Bond poll..current results: Total of 381 votes and RA has 63% of them.

Ok, this has nothing to do with anything you've been talking about, but it's pretty hysterical, so I had to share it with you. It's a fictional conversation between Messrs Darcy and Thornton...

(I'm loving the Robin Hood stuff. I think Gisborne is my favorite character of them all.) And that first picture - with the beer - knocked me off my seat again. I'm getting all bruised up, here!

Guy's fans are legion, Laura, as I'm sure you've discovered. They're very loyal to him - the last ep of RH3 felt very funereal among his followers.

Lucas was my fav during Spooks7&8 but his self-destruction in S9 wasn't credible in my eyes. My loyalty shifted somewhat to John Porter, although 'the real thing' is more interesting than any of them.

While collecting the Guy RH 1 photos, I was struck again by RA's range of expressions. Notice how his eyes pop in the above pix.

He really didn't appear very often in ep 1, however by the end of the series the writers realized what a fine actor they had in RA. By S2 the storyline had shifted dramatically to Guy's persual of Marian...yum,yum..I often wonder how Lucy Griffiths remained on her feet when he flashed a smoldering gaze deep into her eyes.
*thud*

Sadly (or perhaps not), I haven't seen either the downward spiral of Lucas nor the Strike Back series. I don't have cable, and have to rely on Netflix to get my stuff. Spooks isn't due out until later this month, and so far, no mention of Strike Back.

This past week I was watching the Extras on the RH1 and RH2 DVD's and noticed Season 1 extras mostly about Robin (Jonas) and the gang and Marian of course, very little of RA, and then Season 2 extras are all about Gisborne and Richard :)and Marian (Lucy).

Confused? Well go to the following link to find out all about Richard being voted hunkie of 2010, where it appears 50 dollars will be donated to one of Richard's favourite charities.Now surely he can't complain about that can he? After all every little helps (as the fly said when he..... well I'm sure you know the rest!

You'll enjoy the shows that much more, Laura, when the dvds are finally in your paws:) An all-region player is priced very reasonably at US amazon website. Ours works great. Tonight we'll watch the very first ep of Cornwell's entire Col Sharpe series(hubby's gift from me). The dvds are region 2 - bargain price from amznUK compared to US. Therefore, the all-region player eventually pays for itself.

That's interesting about the RH extras Musa. I must watch them again. A hot rivalry broke out within the RA universe over Guy and Robin. The idealists pointed out the former's shortcomings..such as cold-blooded murder;) while those with a more relaxed attitude towards the ancient legend fell head over heels for a tall, sexy sliver of supple leather and defended him tooth & nail.

So, the hunkies poll has finally come to an end, Sue. Clever way for Her Hunkess to get mucho website hits in 2010. Why else would should permit repetitive voting? Just a lark when it comes to choosing the hunky of the year---but would be a purist of course if it was a more serious democratic exercise:)
We all enjoy her site, so why not help keep it around, right?

How about Dezz's James Bond poll? Need to check to see if Richard still holds the lead in that one.

I keep going back and watching the James Bond themed video. Love it.

I would LOVE to get a screen cap from the elevator scene... the girl walking away, and that look that he's giving her... priceless!

The all-format player is going to have to wait... need a job first. Fingers crossed that it'll happen this year. Meanwhile, fingers ALSO crossed that Netflix catches up with RA, and starts making SB available.