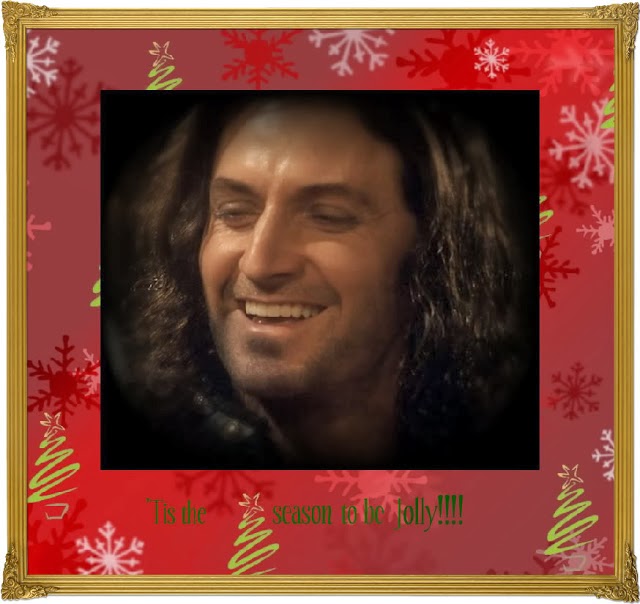 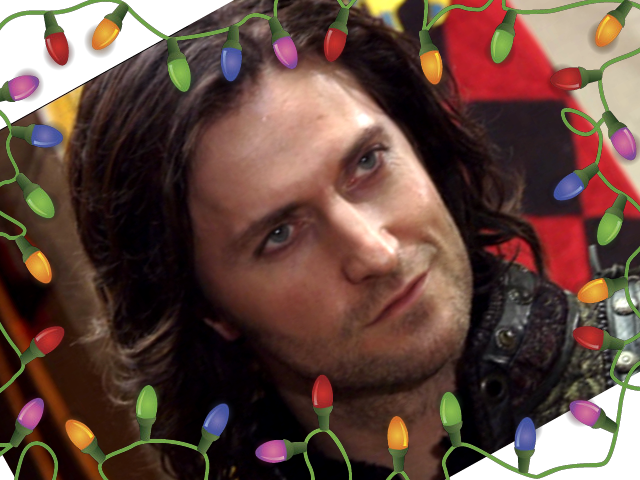 Thanks to the richardarmitagenet website and Alicia5908 on Twitter for translation of following French Mag RA article. Sincerely hope he will become one of the "influential members of the kingdom of Hollywood";)
Carrefour Savoirs (English Translation)
Looking at the photo you would probably say that this face is known to you without being
able to place it. You will be enlightened. By Arnaud Bordas.
When an actor is bordering on 1m 90 and shows a face with regular features and gray-blue
eyes that could bring down a group of women, what can he do to get noticed?
Where others would have chosen the easy way out and have tied themselves to posh roles
in romantic comedies, the Englishman Richard Armitage, who came from British television,
has preferred to interpret a bearded dwarf with long hair in The Hobbit, the new trilogy by
Peter Jackson, inspired by the works of J.R.R. Tolkien. Well done: the role of the charismatic
Thorin Oakenshield, the actor disguised by the talented makeup artists and shrunken
through the magic of digital effects, has made his mark in the minds of audiences around
the world just as Viggo Mortensen had with his interpretation of Aragorn in The Lord of the
Rings ten years ago. The two characters have a lot in common besides their status as heir to
the throne, which Thorin must regain accompanied by the Hobbit Bilbo, Gandalf the Grey
Wizard and his twelve fellow dwarves, embarking on a journey that will take him to Moria,
(author’s mistake – should be Erebor) the kingdom of his people when they were driven out
by the terrifying dragon Smaug. We remember the start of An Unexpected Journey - the first
part of The Hobbit, released in cinemas last year - in which Thorin heroically faced his
nemesis, the white orc Azog.
This year he is expected to shine in the second chapter The Desolation of Smaug, where his
role will gradually become more complex and end in climax during the gigantic Battle of Five
Armies that ends the last chapter. After that, the name Richard Armitage should certainly be
one of the influential members of the kingdom of Hollywood. 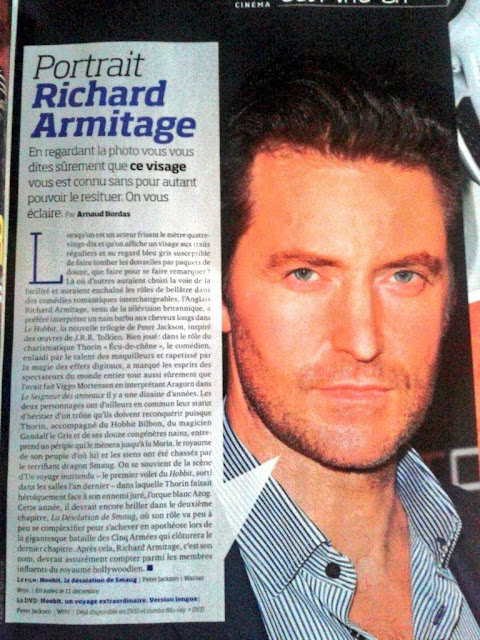 That's right - there is that music in DoS called the soundtrack - we'll squeeze it in even though the composer doesn't have a sleeve of tatts;)  Watch for glimpses of Thorin at end, including one where he...wait for it...smiles! WooHoo!  Beautiful music -- as you listen, you might want to climb unto your sofa and take off your shoes & socks -- PJ style. 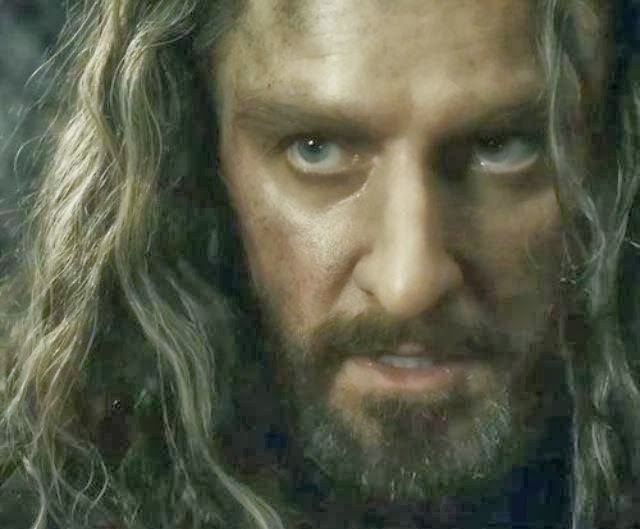 Sincere thanks to Annette at http://richardarmitageonline.com/ for hosting Richard's thoughtful messages to his fans:
Message from Richard Armitage, 19th December 2013
Hi everyone,
Well I just wanted to come on line and wish everyone a Happy Christmas (Turkey Day or Holiday, depending on your preference) it's been another wonderful year, which has been full of hard work, fun and surprises. Thank you for your continuing support of my work, I hope you never underestimate what that means to me personally. Seeing so many at the LA premier (sorry about the un fan-friendly red carpet) Berlin, London, Madrid is really the highlight of the year. I am very proud to have such a dedicated community of 'well wishers' (better word than fans...right?) Proud because of the dignity and decency with which you communicate with each other and document your ideas. It's always illuminated with positivity and support for each other, unlikely friendships forged through a common interest. That makes me proud, and brings me to my real reason for the message. To say a huge thank you to Annette Gill, who has worked so hard on her web pages, doing exactly what I just described in a very elegant way. I think she is truly a wonderful journalist and archivist and I would like to thank her personally for all the time she spent creating and updating the site.
I wanted to wish you love and happiness for 2014, thank you for the generous gifts and the donations to the 'Just Giving' pages I think our totals are looking very healthy.
Without getting into a pulpit or onto soap box, (cynics tune out now!) I want to say that for me especially as I get older, this time of year becomes more about making the journey to be with family or friends and sitting around a table which hopefully has some good food on it, however bountiful that is. But for those who don't have very much or are alone, I wish them at least a sense of peace for a day. I know that I am happiest when I can be useful, which usually involves giving time and effort towards something. That gives me peace. (Guess who's making the gravy this year!!)
This quote isn't meant to be maudlin, because I actually find it uplifting, but it expresses what I mean. It's Sonya from Chekhov's Uncle Vanya.

What can we do? We must live out our lives....we shall live, Uncle Vanya. We shall live all through the endless procession of days ahead of us, and through the long evenings. We shall bear patiently the burdens that fate imposes on us. We shall work without rest for others, both now and when we are old. And when our final hour comes, we shall meet it humbly.... we shall enter on a bright and beautiful life. We shall rejoice... A tender smile -- and -- we shall rest. We shall hear the angels. We shall see heaven shining like a jewel. We shall see evil and all our pain disappear in the great pity that shall enfold the world. Our life will be as peaceful and gentle and sweet as a caress. I have faith...we shall rest.
fumblingly sent from my iPad 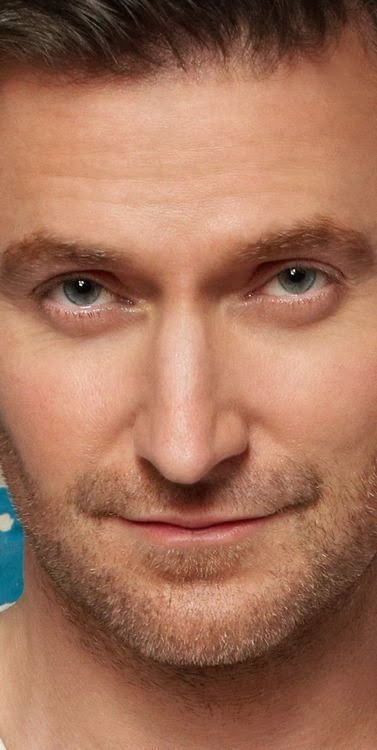 Often times people just need a good laugh at this time of year.  Or group therapy at the North Pole: 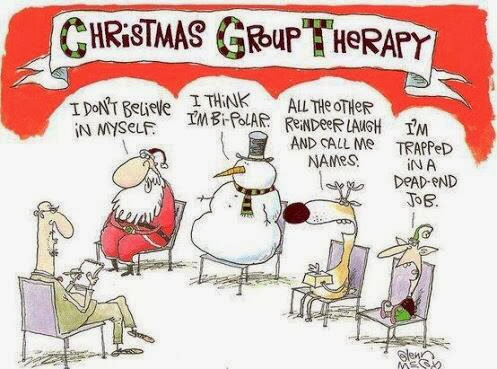 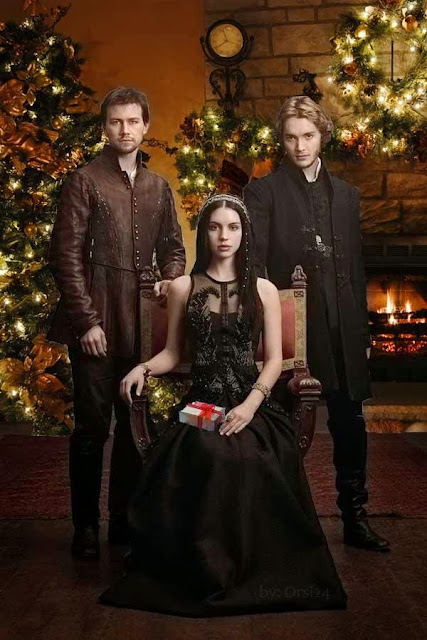 In the spirit of being jolly at this time of year--a truly inside RA fanworld joke.  Hilarious..kudos to the "well wisher" creators: