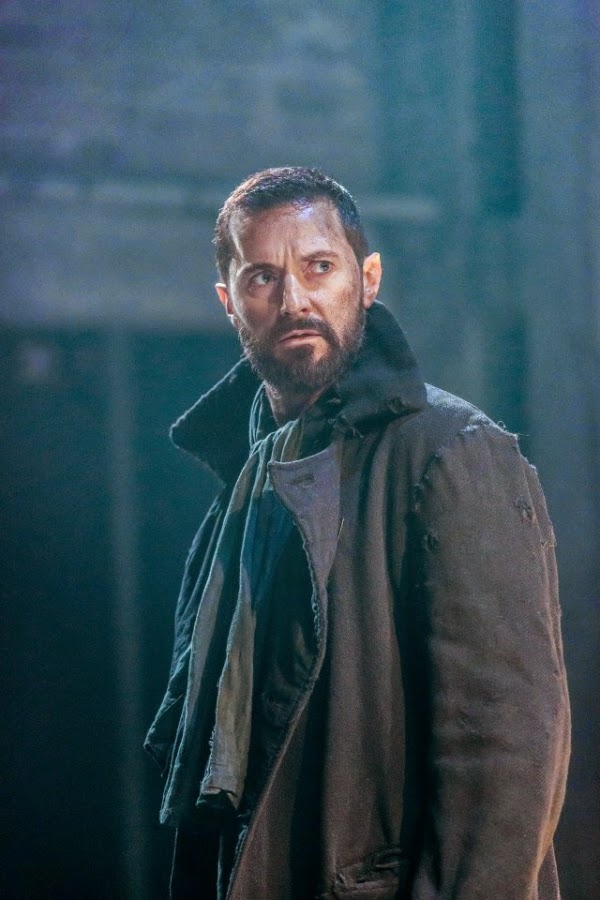 Chapter 31 Excerpt:
Dolarhyde arrived late. He stood at the back with his arms folded..
His presence disturbed Dandridge, the young man in charge. Dolarhyde carried an air of authority at work. He was the recognized darkroom expert from the parent company next door, and he was known to be a perfectionist.

Reba McClane kept her seat as the others were filing out. Dolarhyde approached her carefully. He spoke to her at a distance while there were others in the room. He didn’t want her to feel watched..
“I thought you hadn’t made it,” she said.
“I had a machine down. It made me late.”
The lights were on. Her clean scalp glistened in the part of her hair as he stood over her..
She had her purse with her, and a light raincoat. He stood back when she came into the aisle behind her searching cane. She didn’t seem to expect any help. He didn’t offer any...

“I’d drop you, love, but I’m late already. Say, Mr. Dolarhyde, if it wouldn’t be too much trouble, could you-“
“Danny, I have a ride home.” She held in her anger. The nuances of expression were denied her, so she kept her face relaxed. She couldn’t control her color, though.
Watching with his cold yellow eyes, Dolarhyde understood her anger perfectly; he knew that Dandridge’s limp sympathy felt like spit on her cheek.
“I’ll take you,” he said, rather late.
“No, but thank you.” She had thought he might offer and had intended to accept. She wouldn’t have anybody forced into it.
She followed the edge of a dividing strip across the parking lot toward the bus stop, her raincoat over her shoulders, tapping the edge with her cane..
Dolarhyde watched her from his van. His feelings made him uneasy; they were dangerous in daylight.

..Reba McClane heard the van behind her. It was beside her now.
“Thank you for inviting me.”
She nodded, smiled, tapped along.
“Ride with me.”
“Thanks, but I take the bus all the time.”
“Dandridge is a fool. Ride with me… “— what would someone say? —“for my pleasure.”
She stopped. She heard him get out of the van.
..He didn’t touch her. In a moment she said, “It’s better if I take your arm.”

She had wide experience of forearms, but his surprised her fingers. It was as hard as an oak banister.
She could not know the amount of nerve he summoned to let her touch him.
They said little during the drive. Waiting at the red lights, he could look at her.
She lived in the left side of a duplex on a quiet street nearWashingtonUniversity.
“Come in and I’ll give you a drink.”
She felt the van rock as he got out. Her door opened. It was a long step down from the van. She bumped into him lightly. It was like bumping into a tree. He was much heavier, more solid than she would have judged from his voice and his footfalls. Solid and light on his feet.
Once inside her front door, Reba McClane stood her cane in the corner and was suddenly free. She moved effortlessly, turning on music, hanging up her coat.
Dolarhyde had to reassure himself that she was blind..
“How about a gin and tonic?”.....“Tonic will be fine.” “You’re not a drinker, are you?” “No.”
“Come on in the kitchen.” She opened the refrigerator. “How about… “—she made a quick inventory with her hands—“a piece of pie, then? Karo pecan, it’s dynamite.”
“Fine.”
..Dolarhyde tried to make conversation to keep her from feeling his stare. “How long have you been at Baeder?” No S’s in that one.
She.. cut him a slice of pie, guiding the knife with her left index finger.
He watched her handle the bright knife. Strange to look at the front of a woman as much as he liked. How often in company can one look where he wants to look?
She made herself a stiff gin and tonic and they went into the living room. She passed her hand over a floor lamp, felt no heat, switched it on.
Dolarhyde ate his pie in three bites and sat stiffly on the couch, his sleek hair shining under the lamp, his powerful hands on his knees. She put her head back in her chair and propped her feet on an ottoman.   “When will they film at the zoo?”....“Maybe next week.”
“It’s a great zoo. I went with my sister and my niece when they came to help me move in. They have the contact area, you know. I hugged this llama. It felt nice..

..He was sweating a little. Conversation was hard. Looking was good, though. She had good legs. She had nicked an ankle shaving. Along his arms a sense of the weight of her legs, limp.
..She drained her glass. “Say, I’ve got some Mrs. Paul’s crab-ball miniatures in here. They’re pretty good. I shouldn’t have served dessert first. Want some?”
“Um-hmmm.”   She went into the kitchen. “How about coffee?” she called.   “Uh-huh.”
“Let’s talk about something for a minute and get it out of the way, okay?”
Silence.
“You haven’t said anything lately. In fact, you haven’t said anything since I mentioned speech therapy.” Hervoice was kind, but firm. It carried no taint of sympathy. “I understand you fine because you speak very well and because I listen. People don’t pay attention. They ask me what? what? all the time. If you don’t want to talk, okay. But I hope you will talk. Because you can, and I’m interested in what you have to say.”
“Ummm. That’s good,” Dolarhyde said softly. Clearly this little speech was very important to her..
Her next statement was incredible to him.
“May I touch your face? I want to know if you’re smiling or frowning.” Wryly, now. “I want to know whether to just shut up or not.”
She raised her hand and waited.
How well would she get around with her fingers bitten off? Dolarhyde mused. Even in street teeth he could do it as easily as biting off breadsticks. If he braced his heels on the floor, his weight back on the couch, and locked both hands on her wrist, she could never pull away from him in time. Crunch, crunch, crunch, crunch, maybe leave the thumb. For measuring pies.
He took her wrist between his thumb and forefinger and turned her shapely, hard-used hand in the light..                            [Fan manip by akamaihd shows Dolarhyde with Reba] 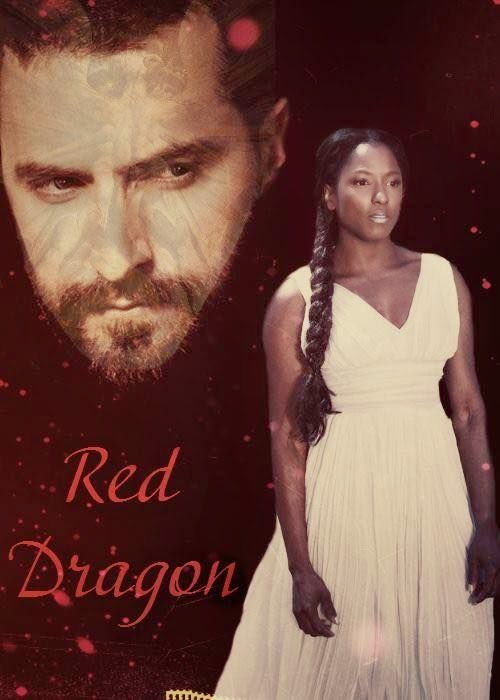 Too close to home. Too early in his Becoming. She wouldn’t be there to look at anymore..
“Take my word that I’m smiling,” he said. Okay on the S. It was true that he had a sort of smile which exposed his handsome public teeth.
He held her wrist above her lap and released it. Her hand settled to her thigh and half-closed, fingers trailing on the cloth like an averted glance.
“I think the coffee’s ready,” she said.
“I’m going.” Had to go. Home for relief.
She nodded. “If I offended you, I didn’t mean to.”....“No.”
Reba MeClane made herself another gin and tonic. She put on some Segovia records and curled up on the couch. Dolarhyde had left a warm dent in the cushion. Traces of him remained in the air—shoe polish, a new leather belt, good shaving lotion.
What an intensely private man..Privacy was important to Reba. As a child, learning to cope after she lost her sight, she had had no privacy at all.
Now, in public, she could never be sure that she was not watched. So Francis Dolarhyde’s sense of privacy appealed to her. She had not felt one ion of sympathy from him, and that was good.
...Involved. Reba knew that she was physically attractive to men—God knows enough of them copped a feel with their knuckles when they grabbed her upper arm.
She liked sex very much, but years ago she had learned something basic about men; most of them are terrified of entailing a burden. Their fear was augmented in her case.
She did not like for a man to creep in and out of her bed as though he were stealing chickens.
...It would be so nice to be wanted by someone with the courage to get his hat or stay as he damn pleased, and who gave her credit for the same. Someone who didn’t worry about her.
Francis Dolarhyde—shy, with a linebacker’s body and no bullshit. She had never seen or touched a cleft lip and had no visual associations with the sound. She wondered if Dolarhyde thought she understood him easily because “blind people hear so much better than we do.” That was a common myth. Maybe she should have explained to him that it was not true, that blind people simply pay more attention to what they hear.

Tyger Tyger, burning bright,
In the forests of the night;
What immortal hand or eye,
Could frame thy fearful symmetry?
RA's copy of Red Dragon + tweet hint he'd spend the day with a feline.. 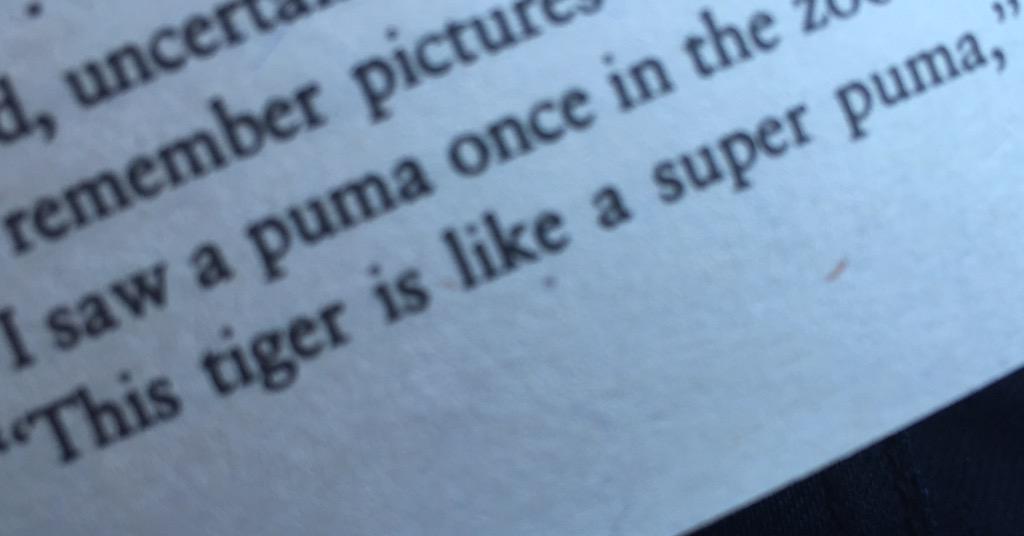 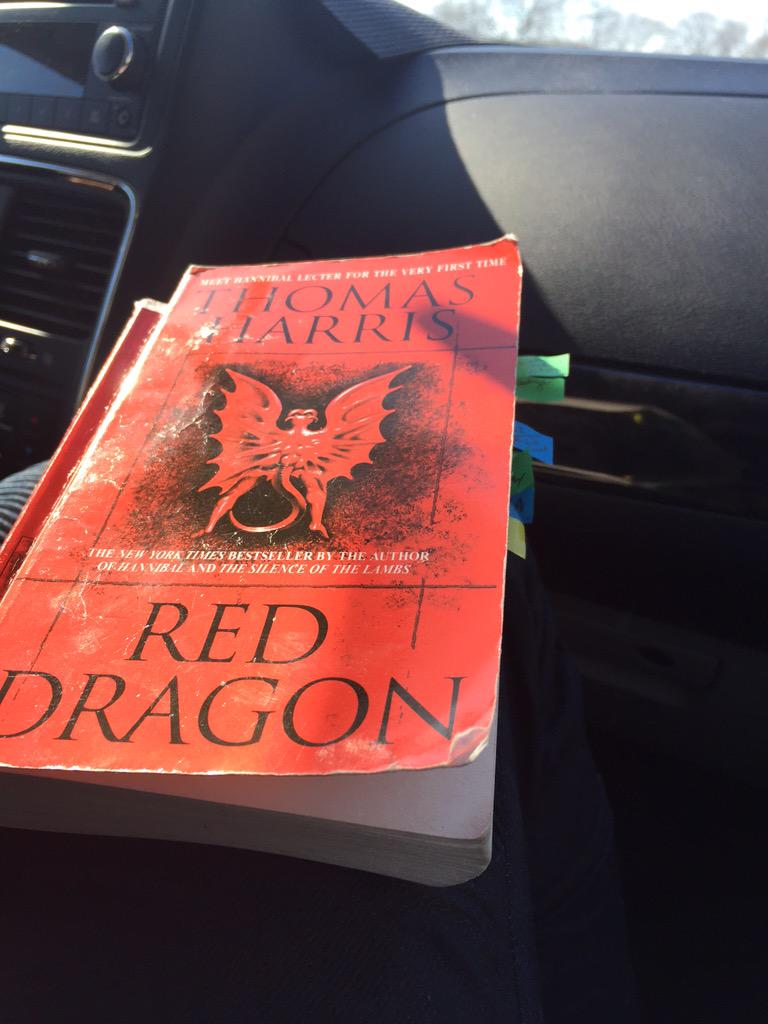