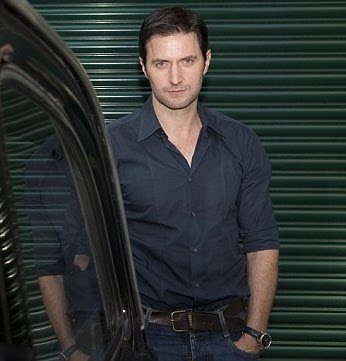 Great find tonight on twitter--posted by..

>sinjoor
http://bit.ly/9r1v3y Spooks with "doublet and hose" about 3 hours ago via mobile web<

>In a taxi with... Spooks star Richard Armitage

We’re trawling the backstreets of Soho, looking for a suitably clandestine setting in which to shoot Richard Armitage. ‘Will this do?’ asks our cabbie, Ken from Loughton, as we pull into a particularly nondescript cul-de-sac. ‘Perfect,’ beams Richard, unfurling his six-foot-two frame from the back seat and adopting a slew of saturnine poses for the photographer. He raises a wry eyebrow as she snaps away. ‘Furtive enough for you?’

If Richard, 39, is doing his best to deflect the stares of passers-by, it’s because he’s about to embark on series nine of Spooks, the ‘MI5, not 9 to 5’ spy thrill-fest that’s become a runaway BBC hit. He tells us his third season as Lucas North, an enigmatic officer once imprisoned in Russia, is all about ‘deception’ – which is like saying that Jamie Oliver’s new series is all about food. ‘No, but there’s lots of internal conflict this time round,’ protests Richard. ‘Ghosts from the past start catching up with Lucas, and it shakes the entire team to its foundations.’

The jitters aren’t confined to whether the team can yet again save London from death plots and dirty bombs by running round picturesque plazas and muttering into their shirt cuffs; it’s become Spooks standard policy to kill off characters without a backward glance, as numerous fallen alumni of the show – Rupert Penry-Jones, Miranda Raison, Lisa Faulkner – can attest. Do cast members receive the new scripts with trepidation? ‘That’s the thing that’s kept the show alive,’ grins Richard. ‘No matter how embedded a personality is, they can go, just like that. It keeps you on your toes.’

‘I try to look rough and knackered on Spooks, but they’re always coming in and fluffing up my hair and hiding my wrinkles. I’m ready for my Elephant Man phase’

Richard reckons there are parallels between spying and acting. ‘In both, the line between real and unreal is very blurry,’ he says. ‘Spies are never quite on solid ground. In Spooks, we’re always off-balance, because the scripts change all the time. I’ve thrown them across my trailer in frustration at times.’ He’s never (knowingly) met a real spook. ‘But I imagine there’s a lot more desk-work and data input than we ever do,’ he grins. ‘Plus I know entry-level MI5 salaries are pretty low, so you’d never be able to run around in Prada and Belstaff like we do.’

If Richard sometimes displays a slight diffidence when discussing his job, that’s because he retains what he terms ‘a certain ambivalence’ about acting, thanks to an upbringing in no-nonsense Leicestershire; his father was an engineer and his mother was a school secretary (‘there were no thesps in our family’). Despite running away from home at 17 to join a physical theatre group and get his Equity card, he still gives the impression of someone as much bemused as enthused by his trade.

Richard was first catapulted into the limelight six years ago, with the
bodice-ripping role of the sideburned John Thornton in the BBC adaptation of North and South. Message boards crashed, D’Arcy-esque pinnacles of hysteria were reached, and an unofficial fan club – the Armitage Army – was born. ‘I was fascinated for a while,’ he says sheepishly. ‘I thought, what on earth are they all talking about? I’d managed to work for years under the radar. Then after North and South, I started really analysing what I was doing, thinking I shouldn’t play certain types of characters because my “fan base” wouldn’t like it.’

He stares out of the cab window. ‘I’m a hopeless people-pleaser in life, so I had to divorce that from my work. Now I’ve gone the other way. I want to play ugly, damaged people. I try to look rough and knackered on Spooks, but they’re always coming in and fluffing up my hair and hiding my wrinkles.’ He arches an eyebrow. ‘I’m ready for my Elephant Man phase now.’

That may be, but the remnants of the Armitage Army may be heartened to learn that not only is he still single, but there are also vague plans for him to tread the boards in something resembling doublet and hose next year.

As we drop him on a crowded Soho thoroughfare, Richard does his best to blend in as only an above-averagely tall, handsome, small-screen sex god can. <

Spooks returns to BBC1 this month -  Read more: http://www.dailymail.co.uk/home/you/article-1312643/Richard-Armitage-The-Spooks-star-taxi.html#ixzz0zwJ3uGym
****
Congratulations post card from the past arrives via carrier pigeon(dove) for Lucas North... 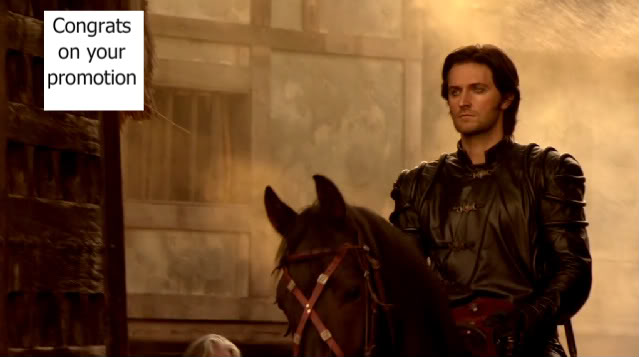 Another lovely interview. But who is this "rough, knackered" and wrinkly person he keeps talking about!?! Doesn't the man own a mirror!
LOL!

haha, Musa, wouldn't everyone love to have experts following on their heels magically erasing any wrinkles?;)

He's wasting time fighting it. Those who are following simply for appearances are scant among RA's fanbase. Vast majority have deeper motives than that for their admiration. He need not worry that all will someday disappear(although humility admittedly is a huge part of the charm) - cinematic history proves otherwise.

Why has septagenarian Clint Eastwood retained strong support(large audiences) for his entire lonnnnng careers?...IMO because there's something there rarely found among entertainers - a totally honest & sincere personality. The quality is reflected on-screen, and the public got it. Those traits consistently result in above average product.

Did you listen to yesterday's radio interview when the MC asked someone in the audience if she was an RA fan - she replied "a little bit." Probably a huge understatement, right?;) The host then asked Richard to give his fan a hug. The latter immediately said to her "come here" and then "a lovely moment."

hmmmm...then he wonders what we find to chat about at the websites;) haha

Yes, I did see the webcast of the radio interview (from RANet)and laughed when the girl said she was a "little bit" of a fan! Intimidating to have him so very close I'm sure, but the hug part was wonderful, he's such a sweet person I think. (Lucky for him it wasn't me he hugged, I might not have let go). I agree that though part of the attraction for us is his looks - no question - the loyalty has to do with who he is as a person and also in large measure his amazing talent as an actor. I also agree with you about Clint Eastwood and his fans. I think loyalty goes much deeper than looks.
So many interviews, lovely photos of RA these last few days. It's RA heaven :) Thanks to you and all the other fan sites and blogs keeping us outside the UK informed and up to date!
Also in another interview he mentioned how he didn't want to disappoint his N&S fans at the beginning. I hope by now that we've all followed and loved him in Strike Back that he realizes
most fans will support him and his career because we care about Richard Armitage, as a person and as an artist. Anyway, like you, I've loved the past few days and wish I was in the UK so could see Spooks live tomorrow :) He also mentioned in one interview he was working on something new between now and Christmas, he couldn't say what it was, but not Strike Back???????

hmmm, Musa, something between now & Christmas??? Is this the 'dark & murky waters' RA mentioned or a different project?

I saw the webcam images, the poor girl was very shy, I don't blame her, I don't think my brain could work properly with him so close and then the hug! So sweet of him to go toh er and hug her. What a lucky girl!

I read too about him not wanting to dissapoint fans and do things he thought we wouldn't like and like Musa I hope, by now he knows for sure we will be there, supporting him in whatever he does, whether it is our cup of tea or not. I really felt bad that he thought that back then.

Well, my take on the 'feeling pressure from fans' topic is that his reaction was probably a combination of 'people pleasing' plus wise career strategy. If those fans didn't continue to watch his performances & buy everything connected with them from dvds, audiobooks, li'l Guys, etc. RA's career momentum might've been much slower than it has been.

His professional instincts are sound and pleasing his fans, IMO, has been one of them. Now, that he's beyond the need to become a solid presence, he has the freedom to move beyond his fans narrow preferences into the universe of possibilities he prefers.