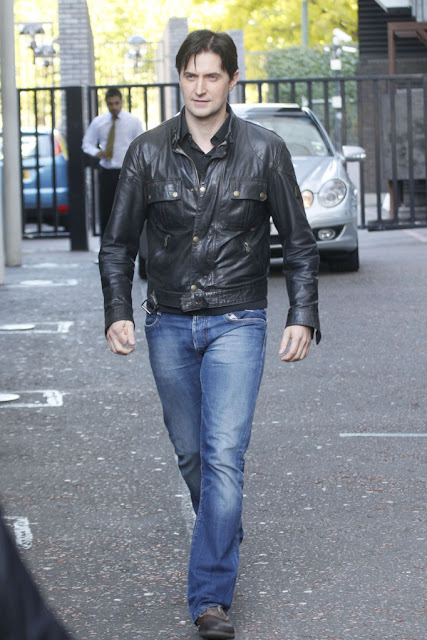 Very complimentary remarks about Richard from the website follow.  Great to see good-old-fashioned capitalism at work -- if you like, you can buy the full interview...see details below:

This is my second interview with actor Richard Armitage this year. I’m not his agent, nor to my knowledge are we related. In the trade, we say “He’s a great chat”, which indeed he is. Many actors struggle to articulate well about their characters. This is not the case with Richard Armitage: he seems to know everything about Spooks spy Lucas North, almost as if he’d created him himself. And as you will hear, the scriptwriters don’t really give him much to go on. Not only is a full script rarely delivered before the shooting of each episode but as an actor he had no idea whether Lucas would survive the 9th series. There’s a great segment where he talks about how he would like to exit the series. Let’s just hope it gets recommissioned.

We did the interview in the offices of Premier PR in the heart of London’s Soho first thing one morning in the early summer. You can hear the buzz of the market starting up outside.

Spooks goes out on BBC1. - Duration: 26min
Type: one to one audio interview - Format: Mp3

Listen to the taster: Dur 1:30 armitagespookstaster

Anyone who has been observing RA related tweets the past few wks, will find the following an interesting read....
p.s.  Today Harry started to follow me....should I be concerned?  Is the pond protection enough once THE master senior spook gets your scent? hehe ;)

Mr West's thoughts can be found at...
http://jameswestsblog.blogspot.com/2010/09/spooky-tweets.html
****
Is the cap camouflage in hopes he won't be slowed down by fans while dashing from studio to studio?  Nice to see him surrounded by adoring teens....look at the size of those eyes (theirs' - not his this time)...hahaha...and a dropped jaw.  If not teens, they should be highly complimented.

Richard looks very good here, casual , but confident. Do you think that that might be his car parked behind him?

Yes, enrich, it probably is Richard's grey BMW. Wonder who's standing beside it?...perhaps a driver for the day to whiz him through London traffic from one interview to the next?...while RA organizes his thoughts for the next onslaught of "are those tattoos real?" queries:)

From now on, no female interviewer will neglect to ask that question. If they don't get his chat-up line 'come over and find out' reply...uh oh;)

Don't know if you're ever on twitter - see the latest blog link above with comments on Spooks. All the characters(past & current) have been enjoying themselves for the past couple wks. The blogger seems to think it's an organized effort by an official source.

My thoughts on the phenomenon - possibly it's crew members stirring up additional interest in the show to ensure future job security. They're all very pleasant, so if that's the case, it just might result in a mushroomed audience size. Lucas North alone has over 600 followers.

could you please post credits for the source of RA's pics outside the radio station. thanks

They were forwarded to me from a friend. Don't know the source.