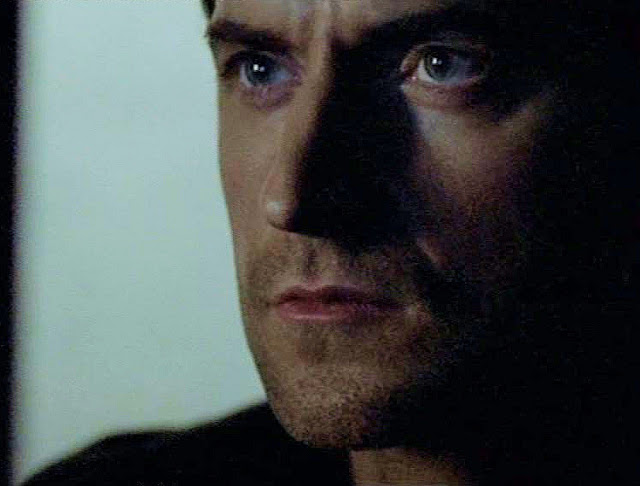 Thx to OML's detective work, we have a clue from Ian Wylie for Ep 5.  Might his vague reference to furniture be a tongue in cheek nod to THE TABLE?
>Lucas / John betrays a possible past in furniture removal.
Ahead of another twist in the tale in the closing moments which I didn’t see coming.

Fans of all things Harry and Ruth may also care to watch out for the “Next Week” teaser trail.<
http://lifeofwylie.com/2010/10/12/spooks-the-sickness-unto-death/

****
Here's the young woman who the US's liberal media(vast majority have admitted to that political bias) tried to paint as a loose runabout, simply because she's a single mother.  AND, most telling, because they unabashedly support the political party to which her prominent mother does NOT belong.  The liberal media stripe predominates on both sides of the Atlantic -  readers/viewers would be wise to keep that in mind at all times.  Bristol Palin & her partner Mark Ballas received lower marks than I'd expected for their Rhumba.  Really believe the music chosen makes a huge difference in these performances - it's not nearly as inspiring as it could've been. Do you agree that 6s were less than they deserved?
****
Now following a BBC twitter account in a show of support for retaining an on-going variety of global TV networks. In truth, it wasn’t personally easy for me to do.  The reason that is so is because the organization’s political slant on the news has for many yrs been spun strongly to the left and,  therefore,  has been ridiculously out of sync with truth on the ground in the US. What prompted the decision to follow was a blogger’s interesting explanation for why there’s a ‘pull to the North’ for entertainment execs in the UK.
After reading the post, the realization flashed across my mind that I'd also felt a pull to the North upon gaining access to the internet 15 yrs ago.  Both career and personal interests had prompted us to purchase our first 'puter.  A genealogy quest ranked almost as high as the career pressure at the time to acquire IT knowledge.  For one family tree branch, every new discovery  zeroed in on the heart of the Industrial Revolution - Northern England.
Here’s the twitter account: http://twitter.com/AboutTheBBC
The blog:  http://www.bbc.co.uk/blogs/aboutthebbc/2010/10/the-pull-of-the-north.shtml 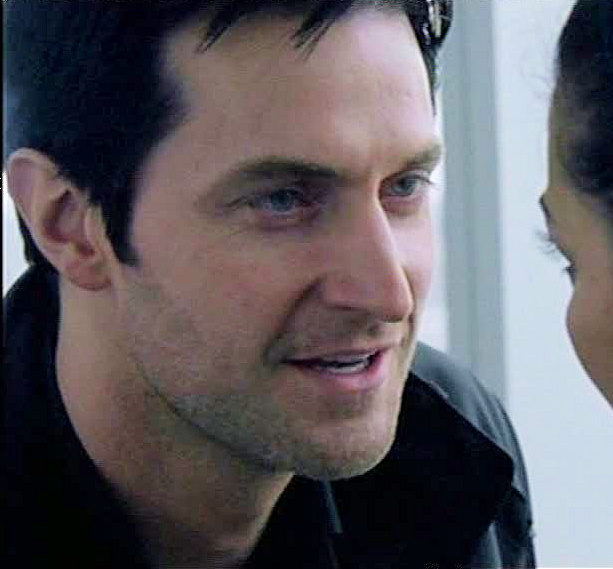 Pic of the tourney scene shoot in Game of Thrones: 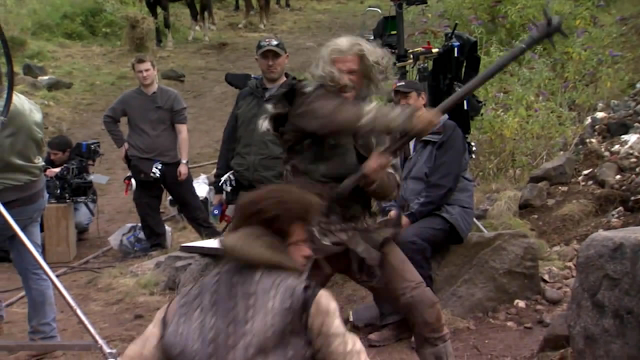 No one could be enjoying this production more than the author, GRR martin (seen below--the C21 version of Henry VIII;)  The writer often mentions the pressure to finish the 5th book of the 7 volume series; however, guess where he flew to yesterday? -- that's right..Northern Irl.  He can't seem to stay away from watching his imaginative dreams spring to life...it has to be the thrill of a lifetime. 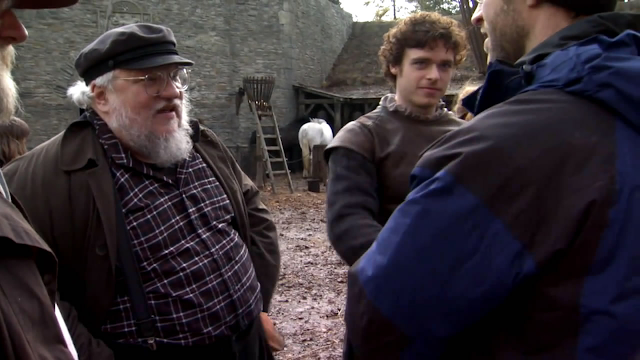 Ian Wylie doesn't especify a kitchen table but I believe (as I said in a previous post) they did shoot that scene.

We're waiting OML...holding our breath...turning blue..debating good vs bad Agent Adorable. When will we finally get to breath out and either thankfully relax or sorrowfully bury yet another RA character? Suppose there is the possibility that the writers could place LucJohn in a state of limbo - perhaps until his surprising return in S11??

I would accept an return like Ruth, I only wish they don't makes us wait much for it.

Writers in next couple eps do seem to be setting the Ruth part up as a leading role - perhaps preparing for Lucas to fade to black...white?

If he does, for whatever reason, there really won't be anything motivating enough to keep me tuned into the show. We've compelling spy thrillers as well. You can watch entire episodes of my favorites on line - look for White Collar, Burn Notice & Covert Affairs. All are currently on hiatus but will soon return to prime time.

Sorry for my bad english. Thank you so much for your good post. Your post helped me in my college assignment, If you can provide me more details please email me.