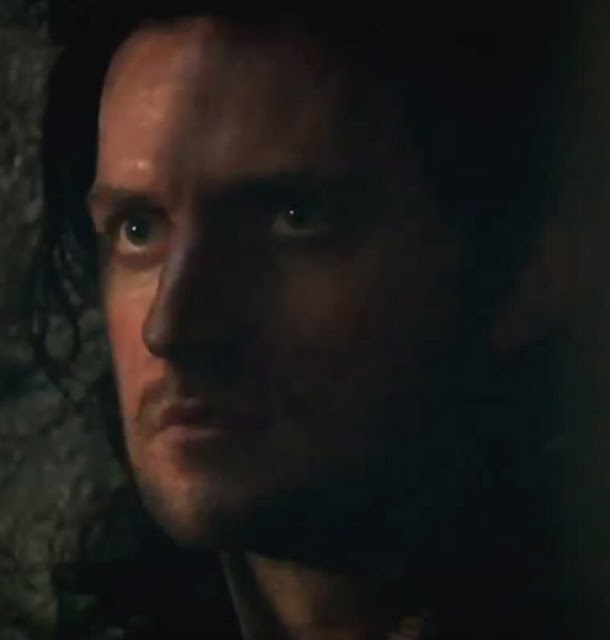 These Guy pix were requested... 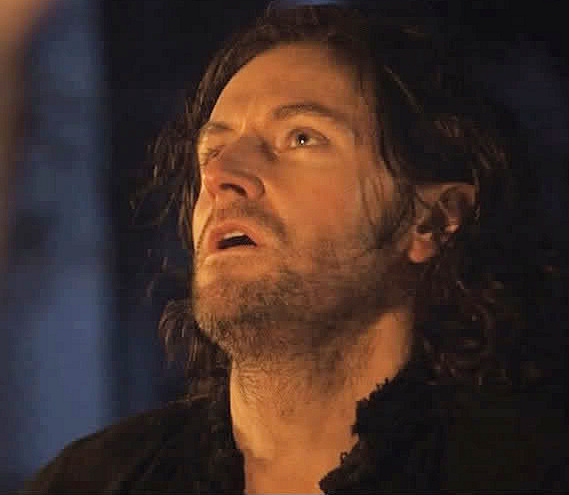 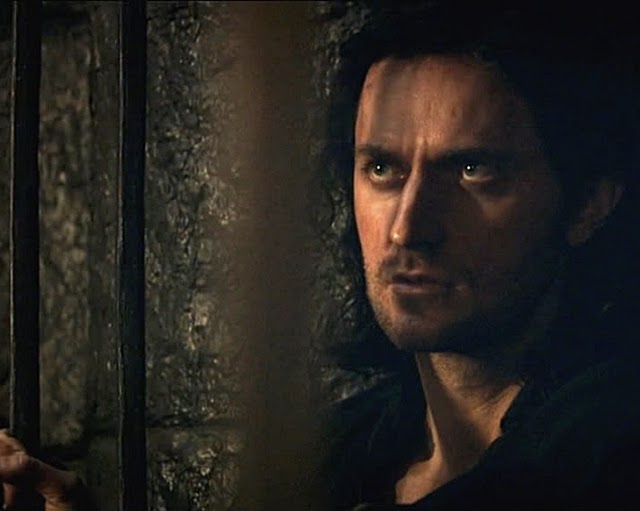 Another interview and quote from Anne Rice where she mentions RA.  I'd say it's obvious Ms Rice watched RH3 and probably noticed not only Richard's 'soul-searching' performance, but also Guy's unbelievable resemblance to the traditionally brightest star in many religious circles -- Jesus Christ.
Her quote:
>Question: I read that there were plans for a film version of "Christ The Lord: Out of Egypt." Is that still happening?
Anne Rice: No. Well, actually, there are new plans. Those [original] plans did go south; that plan fell apart and it was very disappointing. There is some new interest in it, but unfortunately nothing is really concrete yet. There is a wonderful director and producer who is very interested, so I'm hopeful.
Question: Can you tell us who that is?
AR: No, that would be a violation. You can't do that before something is signed and done in Hollywood.

Question: Who, in your mind, would be the ideal person to play Jesus in an adaptation of Anne Rice's novels about Christ?

AR: ..there are other people who could do it. There's a great English actor, Richard Armitage, that I think would be wonderful as Jesus. 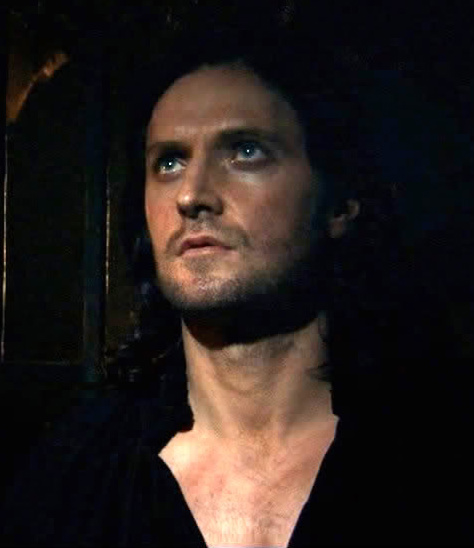 Now....there's a role he could reallllly sink his teeth into....Oh yeah!..and don't forget there's that small but interesting distraction named Mary Magdalen and his defense of her...that's about as romantic as it would get. HA! Sacrilegious you say?...I know, but that's me---just ask anyone who really knows me:)   Believe it's plausible to say the acting challenge would probably make our 'deep waters' fav thespian happy:) Speaking of deep waters..well, not so deep..but doubt anyone will quibble;) 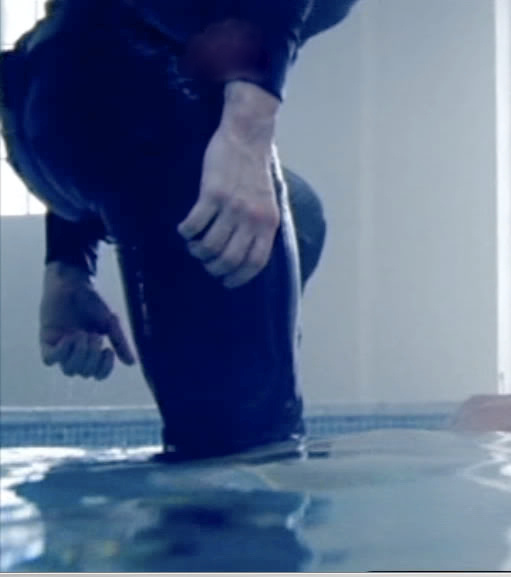 ****
Remember this interview..graciously provided by bccmee..
Finally found the reason why I'd initially assumed Anne Rice had recently mentioned, along with RA, the actor who played Andrew in Sparkhouse.  That actor's name is Matthew McFayden/McFadyen and the one she'd included on her list was Joe McFadden.
http://www.imdb.com/title/tt0324036/usercomments

Can anyone identify the great background music for this fine new vid by amuehlenkamp?
http://sntjohnny.com/front/a-christian-review-of-anne-rices-the-road-to-cana/247.html
Posted by Ricrar at 3:27 PM

Wow! Fantastic find RicRAr! I think Anne Rice has it bad for our RA! I know how she feels:

RA as JC! I'm not familiar with "Christ the Lord: Out of Egypt" - but maybe we all will be?

Love those pics of Guy.

Musa, her JC comment was during an interview at a website called 'The Cult'. That's not the same one you found, is it? Believe these are 2 different interviews.

You're right! Ms Rice seems to be suffering from RA fever...perhaps she doesn't realize there are boatloads of women worldwide with the same delicious affliction;)

She's in a position to possibly suggest Richard for one of the roles she mentioned. From what I've read so far, Anne is assertive about her work, opinions and ideas. Hope there's real substance to the possibility of RA in 'Christ The Lord: Out of Egypt.'

p.s. whispering:)...she's also an aggressive promoter of her own books.

The one I found was from The Vulture website. Yes, two different interviews.

Maybe someone should tell her she's got lots of company out there with "RA fever" :)

I'm not sure how I feel about RA playing Jesus... I mean, I would feel awkward to find Jesus sexy O_O

Ms. Rice seems to be a fan too, love that she keeps mentioning him.

OML, I don't believe there's a moral conflict in feeling Christ is sexy. Besides, RA would not actually be Christ...only 'acting' for the moment as if he was. No matter how accomplished the actor, whenever I'm watching a film there's always a sidebar of my brain showing *this is actually e.g. Russell Crowe pretending to be a gladiator. Might have something to do w/my personal preference for reading fact(history, scientific discoveries, political developments, etc) over fiction.

Perhaps the 'sexy Christ' quandary depends on our definition of sexiness. Isn't it a personal attraction to someone because you admire and identify with something about them. For some it might be purely physical, but for those w/a deeper outlook on life it usually involves identifying with the general attitude that person emotes while on screen. Even great actors cannot totally remove themselves from their core characteristics, no matter how hard they try,IMO:)

You would be looking at Richard's perception of Jesus Christ(or the director's) through an RA prism, wouldn't you? Therefore, you'd actually be finding RA sexy(as always) rather than Christ--right?;)

I think I expressed myself badly. I don't mean to have a moral problem with Jesus being sexy or handsome, at the suggestion RA plays Jesus I imagined him in the costume, then remembered how in some scenes of SB, JP gorgeousness distracted me a little, so I thought that could happen with him as Jesus too and so my resulting reaction to that line of thought/imagination of mine, was 'that would be weird to happen' but doesn't mean it bothers me.
In the end, I agree whom I'm finding sexy/handsome is RA whatever character he's playing.(except with Guy, his sexiness takes a life on its own ;).)

Not sure if I've cleared anything...I guess I rushed into comment and did not form it correctly.

Whichever is distracting OML..as long as it's a male of age--enjoy the feeling;)..one of the most delicious aspects of being human.

You should really be happy if Thorin looks like a miniature GoG. Expect he'll often be just as gruff & domineering as the prince of leather. Hope he doesn't have a long beard though - maybe a neatly trimmed shorter one...not gray. hehe We tend to be particular about the details, don't we;)