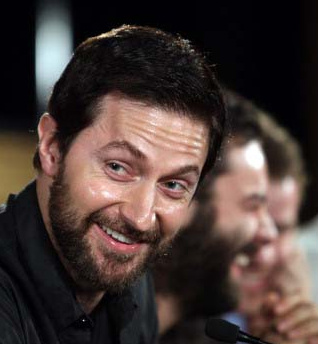 The original video was pulled but a good samaritan and techy extraordinaire came to the rescue  -  Sincere thank you to an RA peach - bccmee, for her speedy and thoughtful transcription of RA’s comments during the press conference...
Announcer: Richard Armitage, Thorin
Announcer: Aidan Turner, Kili
Announcer: Rob Kazinsky, Fili
Reporter: (unintelligible)

Reporter: Can you tell us about yourself?

Richard Armitage: Me as a person? Would you like to be a little more specific? I’ve got 40 years to talk about.

Reporter: Why do you think you’re suited to this role?

Richard Armitage: That’s a good question actually. That might be one for Peter, Fran and Philippa.

Reporter: Why do you want to play this role?

Richard Armitage: I just think it’s just a really amazing opportunity to take a character from a book that I was brought to as a child. I mean my first experience onstage was in a production of The Hobbit.

Richard Armitage: At the Alexandra Theatre in Birmingham. And I played an elf. And Gollum was a little papier mache puppet with a man offstage on a microphone.

Richard Armitage: Yeah his voice was not that different. So it’s kind of been in my childhood very prominently so to come to it as an adult, a middle-aged man, and have another look at it is a brilliant opportunity.

Reporter: Richard, you mentioned about papier mache Gollum. Are you looking forward to acting against green screens?

Richard Armitage: Yeah, I was in the mocap studio yesterday which is a first for me. I’ve never quite understood the technogy behind it but it really does appear that it’s like being in Avatar the movie and I quite look forward to that. But also I think with this film in particular there’s enough creative genius in terms of the art department and the technological department but at the same time I think we’re going to get out there in nature and really experience this possibly more so than a purely technical film which is really exciting. It’s a good marriage of both I think.

Reporter: And you’re all going to be covered in prosthetics. Are you looking forward to that?

Richard Armitage: We don’t know yet actually. It’s still up for grabs, hence the little bit of experimentation in the facial hair department.

Aidan: (off-camera) Yeah, we don’t all normally look like this.
http://fanvideos.wordpress.com/hobbit/#comment-12


The dragon doesn't stand a snowball's chance in hel...err, meant to say--it's toast:) 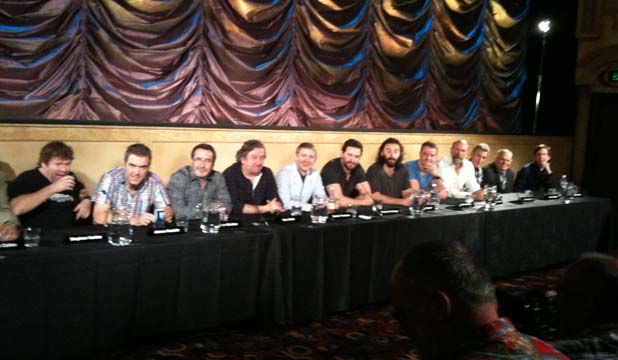 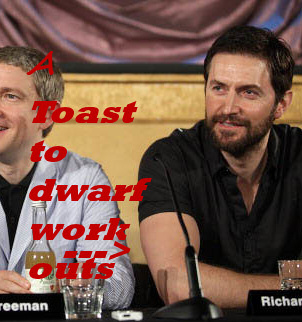 hmmm...no need to say it..you have eyes ;)  Middle-earth muscles-->necessary to fight nasty, slimey looking creatures of all sorts and to wield swords, slay evil ring seekers.  In other words - one of the primary requirements listed in the Commander-in-Chief Dwarf's job description... 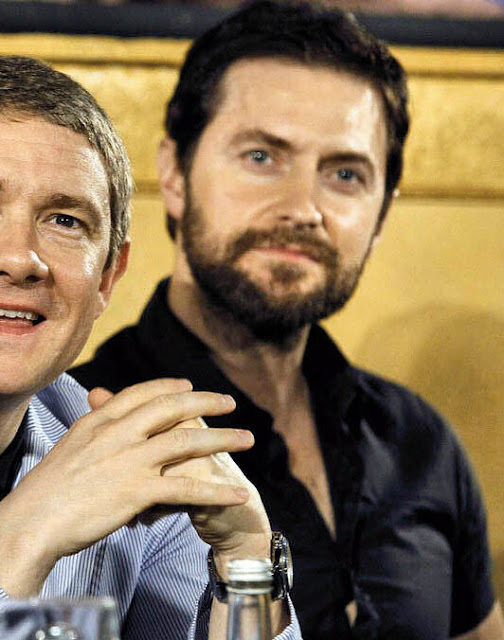 Excerpt:  >One interesting anecdote that even his co-cast was unaware of came from Armitage, who’s playing Thorin, the leader of the dwarves on this particular mission. “My first experience on stage was in a production of The Hobbit at the Alex Theater in Birmingham and I played an Elf. Gollum was a little papier-mâché puppet with a man offstage on a microphone,” he recalled. “So it’s kind of been in my childhood very prominently so to come to it as an adult, as a middle-aged man, and have another look at it is a brilliant opportunity.”<

Active inquiring minds are trying to decipher the lettering on back of the shirt RA wore to the press conference.  Very difficult but last word appears to end in IRAW...
[UPDATE: mystery solved - it's designer menswear G star RAW (a Dutch fashion house)...personally surprised that RA would not feel slightly uneasy about wearing a shirt prominently displaying the word 'star' BUT that actually might've been the charm and fun of it for him.  This film afterall is the one that will no doubt establish him finally as an international star.  Well deserved slap on the back all around for those of you who've wished for many years that it be so.  Job well done by both you, his loyal supporters, and of course by the superlative actor himself. He has earned all the fanfare soon to come his way.  Reporters shortly will no longer feel the need to say "tell us about yourself."

Apparently someone has been in their cups and feeling no pain on this pleasant Sat evening.  Another 'sort of' dream comes true, however this particular follower is not exactly as hunky as the above version, or for that matter any of the many Lucas North clones on twitter ;)  In fact, he can't even spell his name correctly (maybe one too many mugs of Middle Earth's finest brews:)  - we won't get picky about that.  If the above beard is too much for Laura, what will her reaction be to...LOL


Don’t know how this one escaped me until today..RA and HJ by Elisheva Mary

Is anyone else curious about the writing on the back of Richard's shirt? There's a screencap of his back at the end of the full press conference video, but difficult to read what it says, and when he turns his shoulder I read some of the letters, but can't tell?

Funny you should ask that question, Musa. In the post below Sue is curious about the shirt as well. She also asked about the rear jeans logo. Have not seen a closeup but would certainly enjoy doing so:)

Back of shirt is partially visible in many press pix. I did notice the lettering swiftly move by at end of the outside photo-op BUT have not seen a screencap. Can you tell me where one is available? From what I could decipher, the last word ends in AW? The shirt logo on left arm--looks like a red B.

Nice tailored fit to that black shirt. The short sleeves enabled those of us who are bicep addicts - you've probably noticed those numbers are legion;)

While waiting for more evidence, will try to magnify the partial text on press pics.

Richard Stott is next to Martin Freeman (other side from RA), Graeme McTavish has gray pointy beard (on other side to Rob from Aidan - if that makes sense...)

Thx for the link, Musa.

Thanks as well to you Anon for those names...will add above asap.

It's going to make this long Hobbit journey so much more enjoyable now that Richard's fellow travellers are becoming known quantitites. That's true at least for me - perhaps they and their work were already familiar to the majority of RA fans.

I'm almost certain Richard's crinkles appeared in the very top photo when someone joked that the actors won't wear as much latex prosthetics this time. Quickly another added "true" but we will on weekends. teehee Apparently they're expecting to have some R&R time. Look how much the 3 in above pic enjoyed the joke. Get the impression they've already laughed quite alot together.

I think you may mean Ken Stott, who is a great actor, as are all of the British actors that have been chosen for Dwarfdom. (Especially our Richie). The other actor with long dark hair and beard sitting next to Richard (forget his name now)has acted in something to do with vampires (Vampire Diaries I think).

I think Richard may well have nicked his shirt (and jeans) from John Porter's wardrobe. Did you notice those buttons were straining under the pressure from those muscles?

Looked at the Jonia blog, loved the "nipple tweaker" quote. I must admit, I've noticed that Richard has lovely pert nipples, thank goodness he didn't go for any piercings!(Or has he?)

Currently watching the stars arrive at the BAFTA's (on the box) and seriously expect Richard to be there this time next year for his role as Thorin in the Hobbit (best supporting actor).

Ah yes, hope he'll be nominated for the BAFTA's and the Oscars!

You may be right about the shirt, either John Porter or Lucas North wardrobe - maybe LN since he was thinner then -LOL

I know mostly the two dwarves to the right of RA. Long black curly hair,beard,and great smile, Aidan Turner, star of Being Human -yes,vampire- (Season 3 starts on BBC America on Feb 19),and Rob Kazinsky, next to him. (Also know Nesbitt from various TV things).