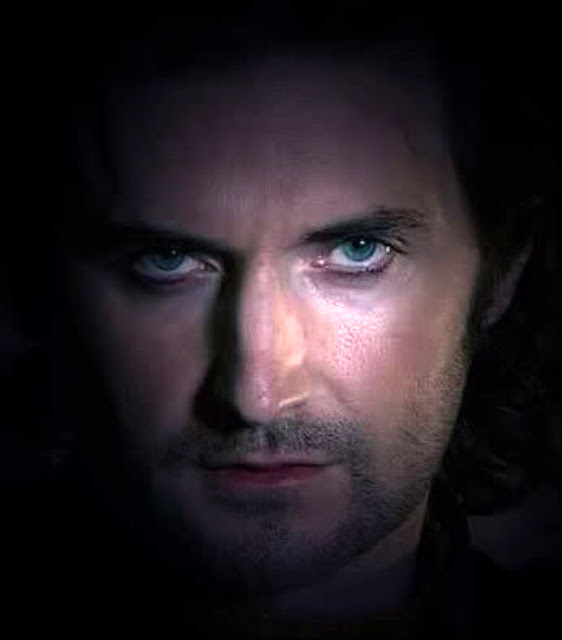 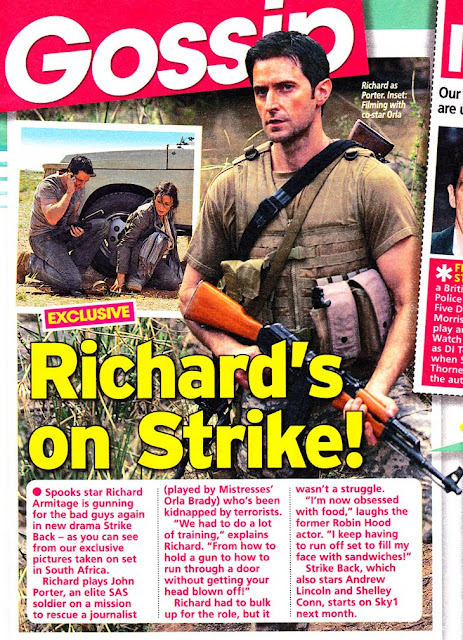 Olympic Update:  Womens' beach volleyball team USA announces they will not give up their bikinis despite option of alternate uniform. Men worldwide smile:)
http://www.nypost.com/p/news/international/us_gals_bare_up_JmD8nS5fFXrp59nTztSvVN?utm_source=SFnewyorkpost&utm_medium=SFnewyorkpost 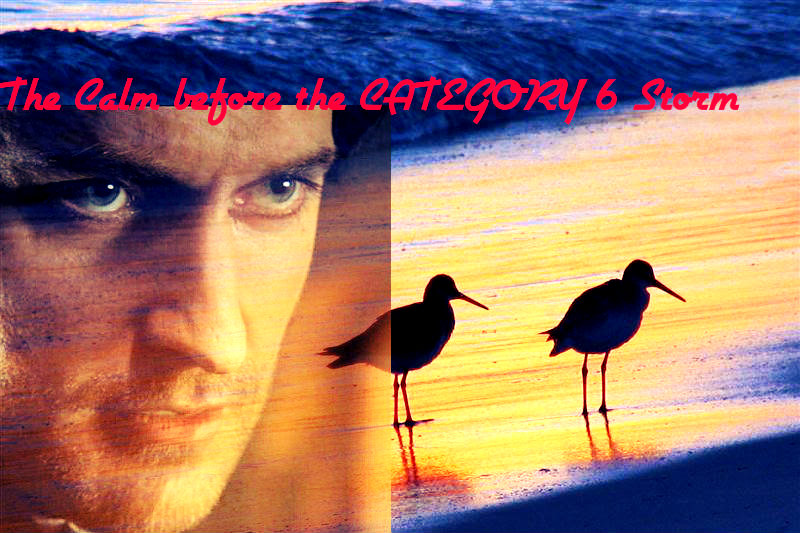 Sincere thanks to www.richardarmitagenet.com for these screencaps from Vblog:
What's up with that boot? 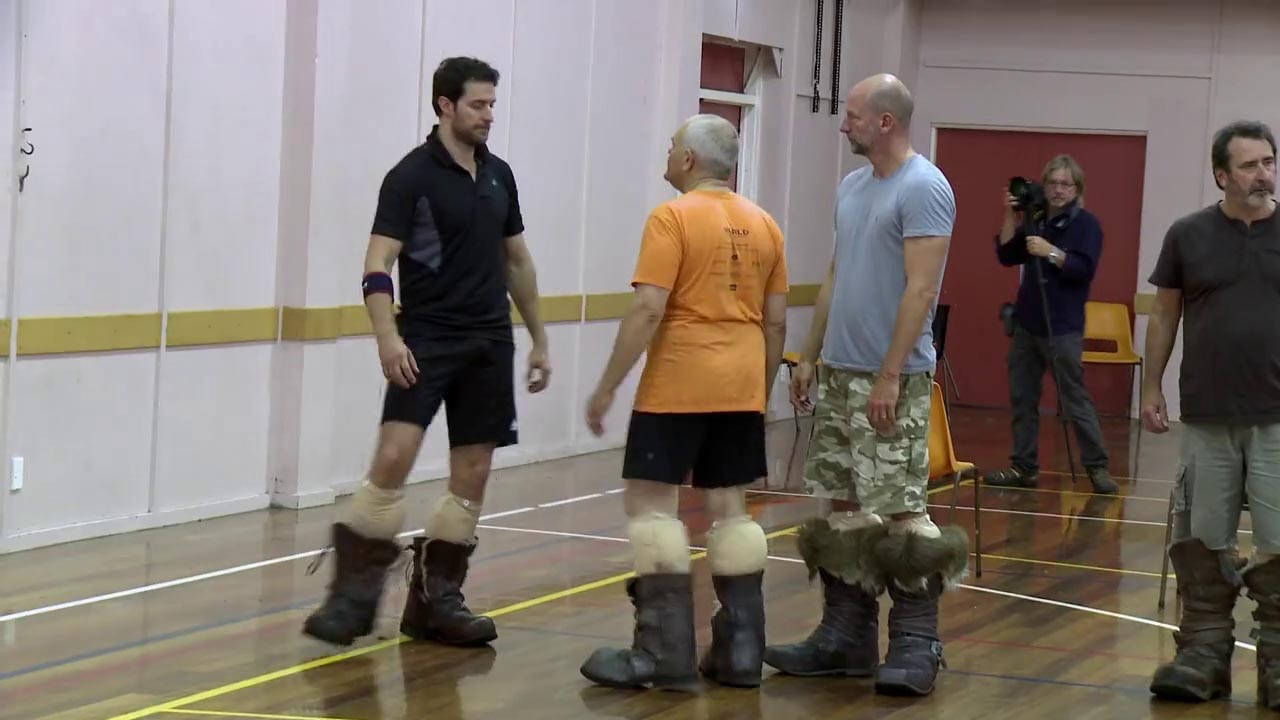 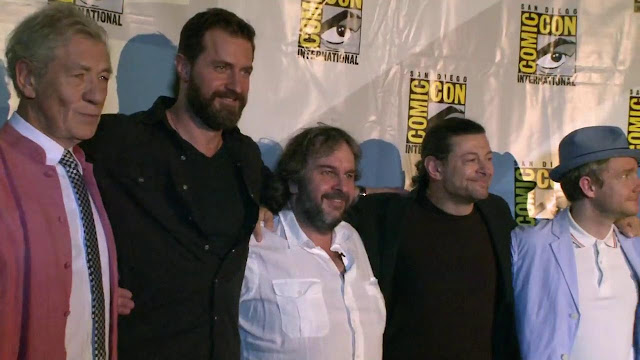 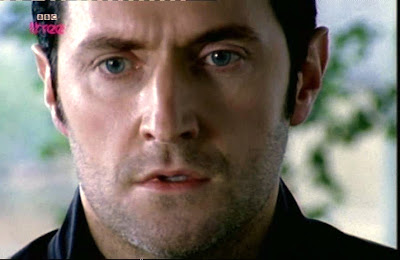 I love that VB scene with the boots,and RA with stubble and no beard. Not sure what they were doing though :)

Great Vid Blog PJ! Lots of RA for us.

Interesting boot action, isn't it Musa:) Why would they need to rehearse tapping boots?They look awfully serious while doing it. Suppose we'll understand Dec 14, if that scene in included in final film.

My fav part of new vblog is RA/Thorin flipping the fish(literally:) at another dwarf.

No news on Category Six. That title is starting to sound a li'l ominous to me, as our annual trip to beach is only a few wks away & so far it's been a very quiet hurricane season. Hoping to see one a week for the next month as a wee bit of natural insurance against a direct hit AGAIN during our vacation.(it's all about us:)

Love the magazine with Richard and the title "100 most eligible bachelors". Is this a mock up or is it actually a real magazine RiCrAr?

Sue, if you look at the People Mag cover, bottom right corner you'll see Pho.to - that's a website for creating all sorts of photo manipulations.

I've made quite a few w/Richard's pics. Fact is that after release of The Hobbit, we could easily find him on more than one entertainment magazine cover.

In one of the vids above, the reporter started to ask him about Thorin singing in the film, and he jokingly replied "you're not going to ask me to sing, are you?" Her answer was "maybe after the movie is released & your voice is famous."

Thought the "100 bachelors" headline was too good to pass up without a little fun.

Things must be starting to percolate over there with the Olympics just days away. Are you planning to visit London for an event, or are you going to stay as far from the hustle & bustle as possible?:)

That creation of Richard appearing on a magazine with the heading "100 most eligible bachelors" may yet come true!

Don't mention the Olympics, I'm fed up of them already and it hasn't officially started yet! As I live in the North of England there is very little to connect us Northerners to what's happening in London.Although having said that the football part of the Olympics is taking place in Manchester (United Football Ground), which is about 5 miles from where I live in Cheshire. There has been absolute chaos regarding the security in Manchester and London, resulting in the army taking over. Just heard reports that traffic in London is absolutely terrible due to Olympic motorway lanes being introduced. I'm not very sporty so I'll be getting out and about in the sun while all the sport is on the telly, so I should look nice and bronzed very soon (well I already am actually, we've got some great weather here at the moment).

Just heard that there will indeed be a third Hobbit film, with part of film two being split and more filming taking place in the Summer. Looks like Richard is going to be splitting his time between the two films TH and CS. Where on earth does he get his stamina from! Wish you could bottle it as I could do with some right now! I'm feeling knackered!

Sue, as far as Richard being a most eligible bachelor. IMO, after many years of dedicated hard work honing his craft as an actor, he definitely deserves happiness in his personal life as well. Remember how often he's stated that he rarely turns down work. He must be in heaven right now with all the professional demands of his time. Wonder when he'll finally find time for those ski trips he enjoyed in the past.

Saw a headline a few days ago saying London cab drivers were on strike in portest of those assigned Olympic lanes. Did they really expect roadway conditions to remain static with the upcoming flood of visitors?

You're wise to avoid London for next few wks, but sounds as tho that didn't prevent games from impacting your life anyway, with the football(we call it soccer)matches nearby. Make sure you wear plenty of sunscreen while ambling around--don't want it's aging effect to lower your chances w/Richard when he finally finds his way back home, do you?*wide grin*;)

It's very hot over here in blighty and so sunscreen doesn't last very long. Sweaty dwarves have nothing on me at the moment! As for lowering my chances with the lovely Richard (fat chance!)what with me sweating cobs in my green, steel toe-capped wellies, squelching in the heat, how could he resist? I know, I'm just one big glamour puss aren't I? How could those Hollywood barbie dolls possibly compete with me around! I do scrub up well when necessary however, and I can vouchsafe that all my bits and pieces are my own. (Nothing surgically enhanced here!)

Speaking of bits & pieces Sue - did you see today's headline from the US Womens' olympic beach volleyball team? It definitely made hubby give an appreciative chuckle. Seems this year they were given the option to wear shorts & tshirts instead of the traditional bikinis.Our girls said Nyet! while mentioning the hot weather you described.

How would you feel if an American managed to steal Richard's heart? Will you share, or is it written somehwhere in UK official documents that the 'national treasure' cannot give his heart to anyone other than a Brit? *wide grin* Might force him to make another *..for the person I love* statement:)

I watched part of our women's soccer game last nite but was disappointed to learn it broadcast from Glasgow rather than Manchester. They said the next one will come from your neighborhood. Why don't you run out on the field during the upcoming game and give a wave to RA fans in the US? If you give it a go, you might want to consider changing into something other than the hiking outfit you described above. haha Not that you wouldn't be fetching either way:)

Talking of the Olympics, there was an almighty cock-up over here. Apparently we got the flags mixed up for South and North Korea and the ladies football team walked off in disgust. See:

There used to be a tradition of streaking across football pitches by Brits at one time. How about it RiCrAr, would it have the desired effect do you think? (Well it beats squelching wellies! You never know Richard might be harbouring a secret wellie fetish and I can give him his hearts desire!Well it was worth a try!As the actress said to the vicar!)

Oh well, these things happen at an event as complicated as the olympic games. Just as long as it didn't trigger another Korean War, this too shall pass.

I understand my candidate for Pres gave a wee bit more advice about the games than was necessary as a visitor.

Although, it's true that most of those reporters writing headlines would've found something else to ridicule about him - most of them are Liberals while he's a Conservative. He's also a brilliant man who knows exactly what it takes to put the US economy back on track. The current occupant of the White House deserves a permanent sabbatical on a golf course in Hawaii.

I really like your idea of streaking across the football field - that would definitely catch Richard's attention as he relaxes after busy day on set. You could write across front of your bod "Hi Richard & Ricrar" then as camera zeroes in on your tiny bum exiting the stadium "THE END, bye" on your backside.
RA would probably be jealous that he didn't think to write a *strategic* message in a particular ep of Spooks8...no but(t)s about it:)

We've discovered a Category 6 producer on twitter who makes it a point to tweet at least once daily. Hope he continues and starts to give non-spoiling updates on the production. He could start to buildup excitement among the potential audience.

Good luck with all that body painting. Bet you could easily find a male friend who would be happy to assist with dotting the i's & crossing the t's:D

Maybe I should write in a strategic place "up The Hobbit, dwarves do it for me (especially Thorin)", well probably not that exact phrase but someything similar!!!(Poor Richard would probably choke on his choccie bar!

Looking forward to watching the opening ceremony tonight. It's been created by Danny Boyle (film director and northern lad). I like what I've heard about it so far, it's supposed to include the British countryside as the theme. There really is nothing to beat the English countryside as far as I'm concerned, even when it rains. I think Danny could be on to a winner!

Hi Sue, I enjoyed last night's Olympic opening - especially the Industrial Revolution smokestacks, workers. Yes, also the previous agricultural era transforming into economic powerhouse of the 18th-19th centuries. Of course, there wasn't time to demonstrate every phenomenon during that era, but the one most fascinating to me, as I researched family history, was the land enclosures that triggered many cultural changes. One major historic result was to send millions of former farm laborers & unemployed factory workers across the pond to labor hungry America. That included my immigrating ancestors. Paternal ancestors from No England - Maternal from Ireland.

The Bond/Queen Eliz scenes were hilarious. Those Corgis really know how to act:)*woof,woof*

I'll be watching closely for your streaking event next few days. Then you & RA will share another similarity - revealing all for the common good.*cough* (might be a stretch:)